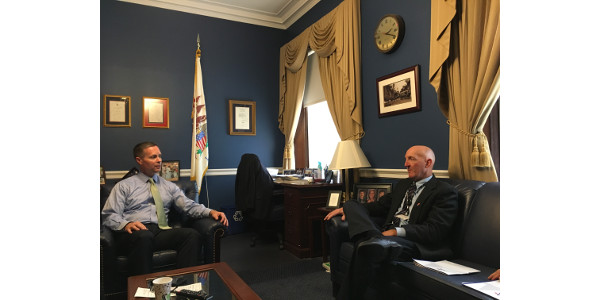 IPPA board member, Dale Weitekamp, visits with Congressman Rodney Davis as his office in D.C. on Wednesday. Weitekamp spoke on behalf of pig farmers in Illinois. (Courtesy of IPPA)

“One-on-one conversations with our Illinois congressional members, and their staff, gives us an opportunity to advocate for our industry and get in front of issues that impact us,” says Propst.

Key issues discussed during those meetings were: the initiation and expansion of markets for U.S. pork exports, importance of the North American Free Trade Agreement (NAFTA), robust funding for a Foot and Mouth Disease (FMD) Vaccine Bank in the 2018 Farm Bill, and support of the “No Regulation Without Representation Act of 2017.”

Illinois pig farmers depend on solid trade relationships with countries such as Japan and Korea. The Japan Free Trade Agreement and KORUS are crucial for continued export opportunities and success of the farmers right here in Illinois. The United States over the past 10 years, on average, has been the No. 1 exporter of pork in the world. Additionally, $5.9 billion of U.S. pork was exported to more than 100 countries.

FMD presents a critical risk to the U.S. livestock industry, crippling the entire agricultural sector and having long-lasting ramifications on its economic viability if an outbreak occurred. The  FMD vaccine bank will give the livestock industry the ability to rapidly vaccinate livestock against FMD.

There are currently more than 2,000 farms producing 5.1 million total hogs in the state. In Illinois, the pork industry contributes over $1.8 billion to the state’s economy, generates more than $170 million in taxes and provides more than 21,900 jobs.

The time is RIPE to transform agriculture