Home / Illinois / 2021 IL Pork Family of the Year
A new user experience is coming! We'll be asking you to login to your Morning Ag Clips account March 1st to access these new features.
We can't wait to share them with you! Read more here. 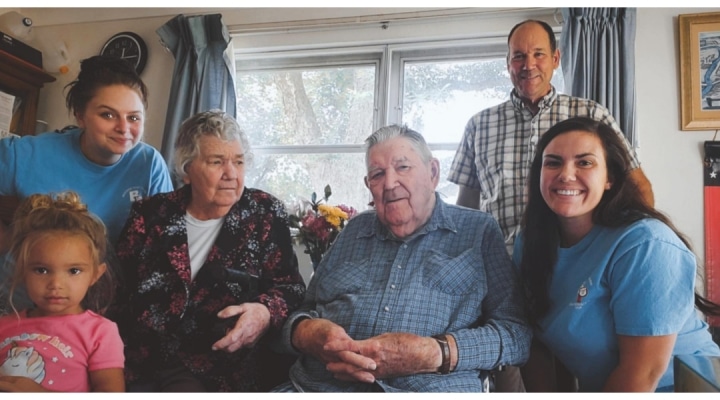 The Brazinski Family, Coulterville, has been Illinois Pork Producers Association Family of the Year for their contributions to the long-term success of the industry through leadership and pork promotion on the local and state levels. (Courtesy Photo)

SPRINGFIELD, Ill. — Each year, the Illinois Pork Producers Association (IPPA) honors a pork producing family who has contributed to the long-term success of the industry through leadership and pork promotion on the local and state levels. In 2021, IPPA proudly recognizes the Brazinski Family, Coulterville, as the IPPA Family of the Year.

The family history of both Jim’s parents is rich in the farming tradition. While the maternal side in the U.S. dates back to the 1850’s, Jim’s paternal grandfather, who fled from Lithuania in 1904 due to political tensions, set up his farm in the current Coulterville location in the 1920’s. Fast-forward two generations, and life for grandfather’s family in Lithuania became difficult when the Russians invaded Lithuania in the 1940’s, seized their farm, and exiled the family to Siberia.

The Brazinski family’s love of pigs started with Jim’s brother, Frank, who started raising hogs for a 4-H project in 1966. In 1984, Jim graduated from SIU Carbondale and started constructing more hog buildings on their family farm. At that time, to keep costs down, they built their own hog buildings – everything from pouring concrete slats to building feeders to designing and making curtain openers. Anything they thought they could build, they tried, including manure pumps. They still build a lot of equipment in their shop today.

On a herd visit in 2006, Dr. Bill Hollis, a veterinarian with Carthage Veterinary Service, suggested that the Brazinski Family join a sow farm to improve the consistency of their pig flows and to be able to raise larger groups of pigs all the same age. That eliminated the sows from their farm and improved the health and efficiency of the growing hogs. The Brazinski family farm is still following that structure today.

“Jim is the type of farmer every community needs. He mentors students, serves on local boards, and operates a strong growing farm business,” shares Dr. Hollis. “He has been a great client my whole career. I am proud to work with Jim and his family.”

Jim hopes the Brazinski Pork Farm will continue to grow in coming years. Currently they have six full-time and two part-time employees. They are the most essential element to the farm’s success.

Additionally, there are four farms that contract finish hogs for the Brazinskis. These contract farms previously raised hogs of their own and continue to raise these hogs as if they were their own. The Brazinski family continues to strive to produce the best pork possible with care starting at the sow farm.

In Jim’s words, “Whenever we face uncertain or extremely difficult times, I remind myself of the struggles of my relatives. They were forced from their homes and lost their farms to work in labor camps in extreme conditions. When given the opportunity, they started again, survived and eventually thrived once Lithuania regained its independence.”

IPPA is proud to award the Brazinski Family with the 2021 IL Pork Family of the Year title. They are utmost deserving of this designation.