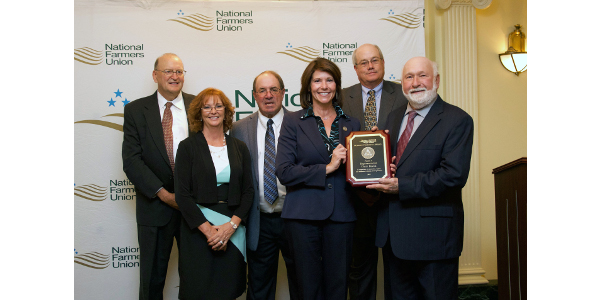 The annual event allows Farmers Union members from across the country to meet directly with lawmakers, USDA leaders and other administration officials to discuss issues important to family farmers and ranchers.

“We’ve seen a dramatic 50 percent drop in farm income over the past four years. At the same time, farmers are enduring weather volatility, uncertainty over foreign trade markets, massive consolidation of farms and agribusiness companies and the ongoing degradation of farming and rural community infrastructure and services.”

“The men and women who feed and fuel our nation need the support of their elected leaders and that is why 320 of them took several days out of their busy fall schedules to advocate at our Fly-in” said ILFU President Norbert Brauer.

“Congress has a long list of issues to deal with this fall, and we want to make sure they are considering the social and economic well-being of American family farmers and ranchers with every vote they cast”, said Brauer.

The Illinois delegates presented the Golden Triangle Award, NFU’s highest legislative honor, to Illinois Senator Richard Durbin and Representative Cheri Bustos of the 17th Congressional District, for their leadership and support at the federal policymaking level for family farmers, ranchers, and rural communities.