Home / Illinois / IFB policy, passion, talent at AFBF Convention
A new user experience is coming! We'll be asking you to login to your Morning Ag Clips account March 1st to access these new features.
We can't wait to share them with you! Read more here. 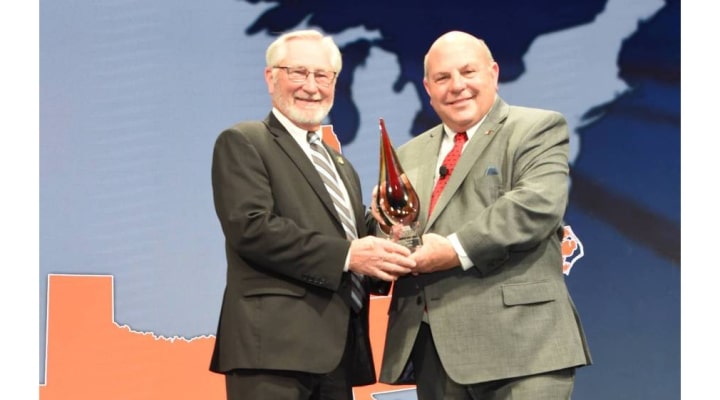 BLOOMINGTON, Ill. — Over 4,000 farmers across the country registered for the 103rd Annual Convention of the American Farm Bureau Federation (AFBF), held Jan. 7-12 in Atlanta, Georgia.

The event, themed ‘People, Purpose, Possibilities – Growing Tomorrow, Together,’ opened Sunday evening with AFBF President Zippy Duvall’s annual address to members. Duvall celebrated meaningful progress on sustainability initiatives and climate policy recommendations, highlighting the work of AFBF climate coalitions such as the Food and Agriculture Climate Alliance. In driving home the theme of growing together, Duvall called on Farm Bureau members to apply the ‘same energy and passion’ on priority issues, such as defeating the proposed Waters of the U.S. rule, just as members did with a proposed repeal of stepped-up basis.

“With last year being in an all-virtual setting, it was incredible to see our nation’s farmers gather again to continue advocating for and protecting the interests of Farm Bureau members,” said Richard Guebert Jr., president, IFB. “I’m very proud of what our delegates have accomplished at the state level and brought forth here to Atlanta for consideration. My thanks go out to every farm family watching from home or getting ready to travel back to their home state for their engagement and support of our Farm Bureau traditions.”

Monday’s closing session featured remarks from U.S. Secretary of Agriculture Tom Vilsack as well as a recorded statement from President Biden. Vilsack touched on the work he had returned to finish at USDA, including the recent announcement to improve markets for livestock producers.

“Today’s national delegate session was a great example of our grassroots at work,” said Guebert. “Illinois again was successful with advancing all but one policy resolution to the AFBF policy book. Our urban ag policy was picked up and adopted, so I’m glad to see our state taking the lead on a growing part of agriculture. Our delegates also were successful with our additions to livestock, renewable energy and broadband. We take policy development seriously in Illinois and it shows with the level of support from the AFBF delegates.”

Climate change initiatives and carbon sequestration, farm labor, dairy and livestock market price transparency, urban agriculture and biofuels and were some of the larger themes of this year’s policy debate.

“When we talk about the climate change arena, it’s critically important that we have clear policy on how farmers will be incentivized around their participation in some of these climate change initiatives,” said Mark Gebhards, executive director of Governmental Affairs and Commodities, IFB. “While it’s a new area, it’s certainly an area that is here to stay as a focus of this administration. Farm Bureau wants to ensure clear policy on how we can engage in these oppotunities, especially for farmers who have already been engaged in ongoing conservation practices.”

Chad Bell of Mercer County was named 4th place finalist as the Illinois representative for the AFBF Achievement Award.

Cassie and Tyler Schleich of Warren Henderson County represented Illinois in the Young Farmers and Ranchers Excellence in Agriculture Competition.

Three Illinois county Farm Bureaus are among those selected as winners in the AFBF County Activities of Excellence Program. Kane, Woodford and St. Clair County Farm Bureaus’ winning programs were featured during the ag showcase.