Home / California / If you want to grow apples, choose the tastiest 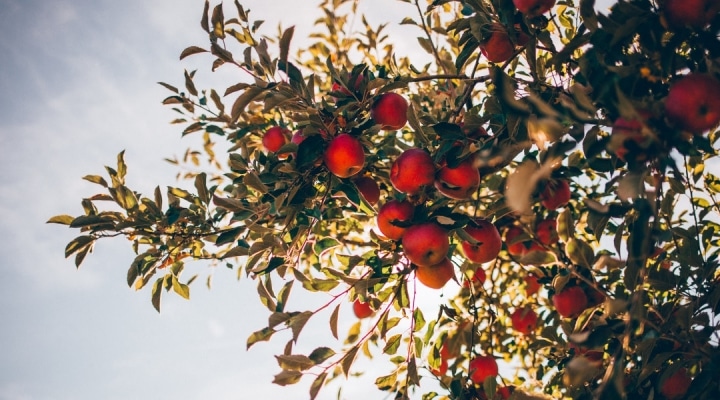 But if you’re willing to learn about pests and make the efforts to thwart them, a few trees of apple varieties selected for excellence in flavor will reward you with years of delectable eating. (Stock photo by Nathan Hulsey on Unsplash)

NEW YORK — If you’re thinking about growing apples, take some time now to test varieties and talk with local growers.

I grow an apple called Hudson’s Golden Gem and I do so for one reason. Yes, this apple’s russeted, golden skin is beautiful. But it’s the flavor that puts it above the rest.

When you buy apples at the store or orchard, your choice is limited to the dozen or so varieties that have been chosen because they look pretty, ship well, store well and have flavor with broad appeal.

We gardeners, on the other hand, can plant any of more than 5,000 apple varieties that strike our fancy. And we can plant and harvest without regard to a variety’s appearance, shelf-life or other commercial attributes.

What the doyen of American horticulture, Liberty Hyde Bailey, said early in the last century about apples applies equally well today: “Why do we need so many kinds . . .? Because there are so many folks. A person has the right to gratify his legitimate tastes . . . (and) should be accorded that privilege.”

We can also harvest at each variety’s peak of perfection. My Macoun apples, for instance, taste different — and much better — than any Macoun apples I can buy. One reason is because I don’t harvest mine until they are so ripe they are about to or have fallen from the branches.

Here are some other flavorful apples I’ve planted. They may have other shortcomings, but they all taste great!

Ashmead’s Kernel originated more than 200 years ago in a Dr. Ashmead’s garden in Gloucester, England. The fruit is a russeted golden brown with a reddish-bronze cheek when struck by sunlight. Inside, a delicious, crisp, yellow flesh.

Cox’s Orange Pippin is another old variety that originated in England, thanks to a retired brewer named Richard Cox, in 1825. The color, orange and red, washed with carmine over a yellow background, limits its American market. Prized strictly for its flavor, Cox is still grown by British farmers despite some commercial flaws.

Ellison’s Orange is a British apple, a relative youngster, that originated in Lincolnshire in 1911. It’s a late summer or early fall apple, golden yellow with carmine stripes, with juicy flesh and a vinous flavor that hints of anise. Cox Orange Pippin is one of its parents.

Not all the good apples come from England. Macoun, for instance, originated in New York, in 1923, with McIntosh as one of its parents. Hudson’s Golden Gem is also American, originating in an Oregon fencerow in 1931.

Another American apple that I’ve grown is Newtown Pippin, which originated in New York City (Queens) about 300 years ago. The light yellow fruit, tart with a hint of tangerine, rounds out the apple season by not developing its best flavor until it’s been in storage until after Christmas. As testimonial to its good flavor, Newtown Pippins were shipped to England in colonial times.

And superior flavor isn’t limited to old apple varieties, British or American. Mutsu (Crispin) came from Japan in 1948. This large, round, yellow apple has a delicate, spicy flavor and a pleasantly coarse texture that is reminiscent of biting into a snowball.

Jonagold was introduced only 40 years ago from the New York State Agricultural Experiment Station. It combines the flavors of its parents, the sprightly Jonathan and the aromatic Golden Delicious. The large fruits are yellow with a splash of light scarlet. Jonagold also has a nice “cracking” flavor — the crisp fruits explode in your mouth with juice and flavor.

I round out my present collection with the variety Liberty, also from New York, dating to 1978. Besides excellent flavor, not surprising with Macoun as one of its parents, Liberty is resistant to the major apple diseases.

The above is only a sampling of the many great-tasting apple varieties. Take a little time to taste a lot of varieties and speak to locals in your area and you might find other varieties that tickle your taste buds and are well suited locally.

Before you get too enthusiastic about planting apples, one caution: Apples are not an easy fruit to grow in many regions. The plants require annual pruning and pest control. (Even Liberty, although disease-resistant, still gets attacked by insects.)

But if you’re willing to learn about pests and make the efforts to thwart them, a few trees of apple varieties selected for excellence in flavor will reward you with years of delectable eating.

Planning for fruit trees in the landscape
September 27, 2021