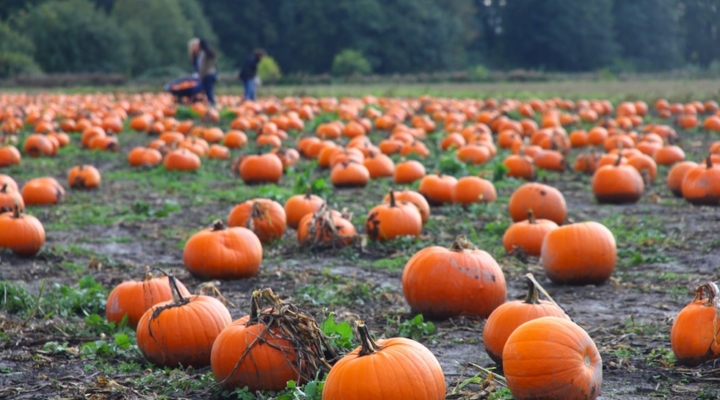 Knowing your pumpkins' lineage isn't merely academic. Lineage might be important if you're growing pumpkins for eating. (GoToVan, Flickr/Creative Commons)

WASHINGTON — Friends have complimented me on my pumpkins, but are these things I’ve grown really pumpkins? Sure, they are round and orange and fluted. But look again: There’s more than a hint of red in their skins, and their shape is more akin to a doughnut than to a basketball.

But yes, they are pumpkins, if only because the word “pumpkin” refers to any squashy-type fruit that looks sort of like a pumpkin. No, a “pumpkin” doesn’t even have to be spherical and fluted and orange; there is at least one pumpkin variety, Lumina, whose skin is pale, almost white. Just the kind of pumpkin to scare Halloween goblins, eh?

Segue over into the world of botanical classification and you find what you and I call “pumpkins” falling into any of four different species. Each of these species also embraces one or more kinds of squashes.

THE STALKS ARE TELLING

The easiest way to tell these species apart is by their fruit stalks. Look at the fruit stalk of Hubbard, Turk’s Cap, buttercup or banana squashes: it’s soft, round and prickly. The second part of the botanical name — Cucurbita maxima — hints at one of the pumpkins included in this group, the variety Dill’s Atlantic Giant. It has been the usual record holder for the world’s largest pumpkin, even if it does have more than a hint of non-pumpkinish pink in its skin. This group also includes the pale Lumina. (The record for the world’s largest pumpkin sits at a whopping 2,624.6 pounds.)

Next, look at the stalk of a Butternut squash; it’s smooth, hard and flares out where it joins the fruit. This species — Cucurbita moschata — includes so-called “cheese” pumpkins, such as Long Island Cheese, a variety esteemed for pies. Why cheese? Because the flattened shape and light ribbing suggests a wheel of cheese.

Yet another species that includes pumpkins are the gourd-like Cushaws, with smooth, hard and angled fruit stalks. Few pumpkins are represented here, but Japanese Pie pumpkin is one. The species name is mixta.

The species with the most pumpkins is Cucurbita pepo, with pentagonal fruit stalks and prickly stems and leaves. You are right to be reminded of zucchini squash here, because this species includes, besides pumpkins, zucchini and other summer squashes, acorn squashes and some miscellaneous gourds. Among pumpkins, here’s where you find varieties such as Connecticut Field, Small Sugar and Jack Be Little.

WHY CHOOSE ONE PUMPKIN OVER ANOTHER?

Most pumpkins used for pies come from the species pepo or moschata. Actually, butternut squash — a moschata — is often the ingredient of the “pumpkin pie filling” that you buy canned.

Lineage also factors into how long you can store your crop. Moschata and maxima pumpkins excel at “common” storage, the traditional method of keeping the fruits through winter by just sitting them on shelves in a cool, dry room.

If you are among the growing legion of gardeners who save their own seed, here’s another reason to know your pumpkins’ lineage: Grow more than one variety of pumpkin, and they just might cross-pollinate. Sow seeds from the cross-pollinated pumpkins and you’ll get pumpkins different from the mother ones.

Finally, a pumpkin’s lineage tells you something about its handle. My pumpkins were an old French variety, Rouge Vif d’Etampe, a maxima species. I tried to lift the first one I harvested by its stalk; the soft stalk quickly said good-bye to the fruit. Pepo pumpkins have better handles.

Investments in beginning farmers paying off

Try some edgy veggies for a groovy garden this year
March 31, 2020