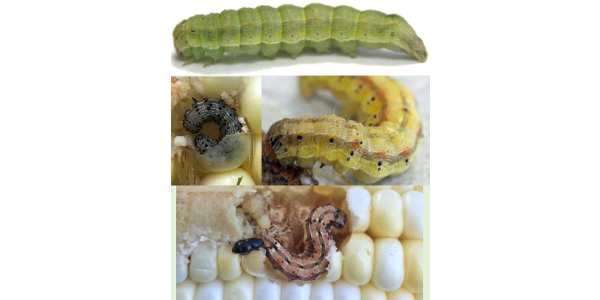 EAST LANSING, Mich. — In the last two weeks, I’ve had many calls, texts and pictures of caterpillars in corn ears (hey, at least some fields have ears). It is important to correctly identify which species are feeding in infested fields, not just to make the right management decision but to be sure that Bt traits are working as expected. I made a tip sheet with pictures, “Identifying late-season caterpillars feeding in the ear,” with helpful ways to identify the three lepidoptera species that I am getting questions about. Some of the pictures came from FonzFacts recipients.

Of the species of concern, western bean cutworm and European corn borer are expected. Western bean flight peaked last week; catch was high in some traps, low in others. Both egg masses and larvae are present in fields. Western bean cutworm can eat through all Bt traits, except the Vip3A protein. Ears in Agrisure Viptera corn should be clean or nearly so compared to other hybrids.

Meanwhile, corn borer moths are starting to fly. Thus far, my trap counts are low. Second generation infestation and feeding may occur in non-Bt and organic corn, and there are many reports of that this year. However, it would be very concerning to find a European corn borer infestation in Bt corn beyond a few refuge plants. Contact a company agronomist and Michigan State University Extension educator if you have such a field so that it can be documented and samples taken. See the Great Lakes and Maritime Pest Monitoring Network website for trap counts for these two species.

Corn earworm has been an unexpected surprise this year in Michigan, surrounding states and Ontario. I confess that I’ve ignored this insect for 20 years because it’s been hard to find in field corn in Michigan after the widespread use of certain Bt traits. Earworm overwinters in the southern U.S. where it is a regular pest of cotton and corn. The first surprise this year was that it moved northward much earlier than normal—in June rather than mid- to late July.

Another surprise are infestations in Bt hybrids that should control it, specifically those with the Cry1A.105 plus Cry2Ab2 combination found in VT Double Pro, VT Triple Pro and SmartStax. It’s true that earworm resistance to Cry1A.105 x Cry2Ab2 was found in sweet corn, and recently reported in collections from field corn in North Carolina; entomologists in the south are concerned about earworm resistance increasing to the both toxins. The earworms infesting our fields this summer originated in the south. As my colleague Pat Porter from Texas says, “You are inheriting our moths,” (and by default, any resistance issues they carry).

But it is a false notion that just because there are resistant earworms in the south, infestation of VT Double Pro corn in Michigan is “normal” and not worth investigating. I’ve never seen a case of heavy earworm infestation in a VT or Smartstax field, ever, so it isn’t “normal” to me. An explanation that I have heard is that Cry1A.105 plus Cry2Ab2 is labeled only for “suppression” of earworm. This is not correct. A quick googlization of VT Double/Triple Pro or SmartStax shows that earworm is still listed as a pest controlled, and a phone call to entomologists in the south confirms the same information in that region. Under normal circumstances, Cry1A.105 x Cry2Ab2 should control earworm. In addition, the Vip3A protein should provide excellent control, and observations from the field so far show that is the case.

The bottom line is if you are scouting fields and finding caterpillars, be aware that they could be earworm. If it’s a Bt hybrid, check the trait package to determine which species should be controlled. If the damage levels are unexpected, then it’s important to investigate and try to explain why. Furthermore, companies are under an obligation to document and report cases of unexplained damage, and take samples if necessary. If something doesn’t look right, contact a company agronomist and an MSU Extension educator sooner rather than later so the field can be visited.