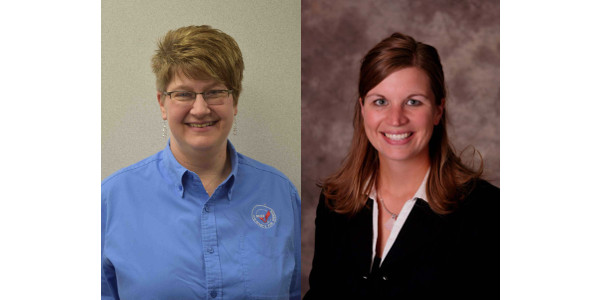 AMES, Iowa — Janine Moore and Tamara Heim were elected as directors on the Executive Committee for the Iowa Beef Industry Council (IBIC), the organization that collects the $1 per head Beef Checkoff Program. Janine Moore, cow-calf and background producer from What Cheer, was elected Secretary. Tamara Heim, cow-calf producer and cattle feeder from Logan, was elected to the At-Large position. The election was held at the Iowa Cattle Industry Leadership Summit held on December 10, at the Hansen Agriculture Student Learning Center in Ames.

Steve Rehder, cattle feeder from Hawarden, was appointed chairman of the IBIC and Executive Committee during the January board meeting. The IBIC board consists of twenty members from the beef and dairy community to oversee beef checkoff programming and investments. Rehder will lead the group of cattle producers who oversee the Beef Checkoff Program. “My recent appointment as chairman provides opportunity to guide and oversee great programs including promotion, research, nutrition, quality assurance, and many others.  These activities help build demand for the beef we raise on our Iowa farms,” said Rehder.

The United States Secretary of Agriculture Tom Vilsack recently announced the appointment of Jenni Peters, cow-calf producer from Bellevue, to serve a 3-year term on the Cattlemen’s Beef Board. Brian Sampson, Nevada, was reappointed to his second 3-year term. The 100-member board is authorized by the Beef Promotion and Research Act of 1985. The Secretary selects the appointees from nominations submitted by eligible organizations representing beef, veal, and dairy producers and importers of cattle, beef, or beef products.

The 2016-2017 Beef Checkoff Program budget will invest approximately $1.6 million in state and national beef promotions, research, consumer information, and industry relations programs. An additional $1.6 million will be forwarded to the Cattlemen’s Beef Board. For more information, contact the Iowa Beef Industry Council.