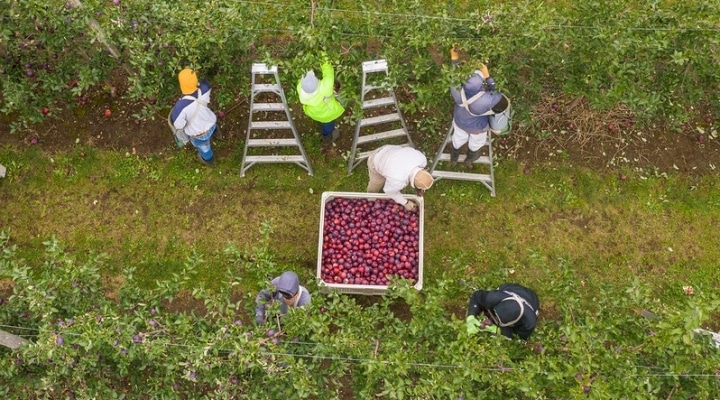 It was easy to zone out and focus on the fruit, energized by the soca and reggae beats blaring from workers’ personal speakers as I searched high and low for splashes of red. (Stock photo via U.S. Department of Agriculture, Public Domain)

The message came in as I was driving through the early-morning darkness.

“Rain delay,” texted Simcoe farmer Brett Schuyler. “Probably till noon by the looks of it.”

My mission was to spend the day picking apples with a crew of migrant farm workers. That meant getting to Schuyler Farms by 6:30 a.m., being in the orchard by 7, and putting down my bucket at 5 p.m.

Mother Nature, who is actually in charge of all farm scheduling, had other ideas.

In past years, Schuyler might have tried sending crews out. At harvest time, every minute counts. But since the sniffles can now prompt a COVID test, it’s not worth risking a worker catching a cold and knocking a whole bunkhouse out of commission.

Picking apples isn’t rocket science, but there’s a skill to it. I know because once we eventually got going, I dropped about as many as I picked.

Some apples fall off the branch at the lightest touch, while others need firm encouragement. The problem is that you don’t know which is which. Going in too forcefully might get you one apple but knock its branchmate to the ground.

Apples bruise so easily that once they hit the dirt, they’re destined for the juicer. And since apples for eating fetch double or triple the price of juice apples, my new bosses preferred I not clumsily litter their orchard with perfectly good fruit.

Eventually I learned a few tricks to ensure more fruit ended up in the bag, which holds about 80 or 90 apples. Once the bag is full, you carefully lower the apples into the large bin in the centre of the row, pulling out any stray leaves and branches that came along for the ride.

The crew of about 10 workers — Trinidadians, Indians, Mexicans and one veteran Canadian picker known as “Miss Kim” — had a rhythm as they moved down the row, instinctively knowing which branches to tackle next while keeping their distance as a pandemic precaution.

It helped that we didn’t need to be choosy while picking Empire apples, said Ephron Maurice of Trinidad, who had the unenviable task of showing a rookie picker the ropes. Every apple went in the bag, destined for cold storage and then store shelves next year.

It was easy to zone out and focus on the fruit, energized by the soca and reggae beats blaring from workers’ personal speakers as I searched high and low for splashes of red.

The speedy pace left little time for chit-chat, though I did get to know Melissa, an aspiring kindergarten teacher who has been in Simcoe less than a month. She was transferred to Schuyler Farms from an Alberta tree farm where — thanks to the pandemic scuttling her trip home to Trinidad — she had been living since January of last year.

“The hardest thing to do is make a start,” Melissa said of her leap into the unfamiliar world of agriculture.

She’s been studying online while in Canada and earning money for her tuition. By next year, she expects to be off the farm and in a classroom.

Farm work is a change of pace for many of the migrant workers who come north looking for a better financial future. Maurice hangs gypsum drywall back home, while Himanshu left his finance job in India to pick fruit in Simcoe as a way to get paid while getting fit.

I’d spent most of the day picking on the ground, which while repetitive wasn’t too taxing. Picking asparagus or tobacco, with the constant bending and stooping, would be brutal. But before knocking off at 6 p.m. — the bosses added an extra hour to make up some of the lost morning — I wanted a turn on one of the large three-legged ladders workers use to get at the top branches.

“Go at your own pace,” Maurice cautioned, looking slightly worried that he’d soon see a reporter sprawled out on the grass.

I thought it best not to mention that I’m afraid of heights.

When I gingerly stepped off the ladder a few minutes later, branches bare and bag full, Maurice was waiting with his review.

“J.P., that was terrible. Just terrible,” he said, chuckling at my slow-motion picking.

Melissa warned that I’d wake up the next day with aching shoulders and a sore back. She wasn’t wrong. There were also bruises from the bag and cuts from the branches. My hands — more used to tapping on a keyboard than tugging at stubborn fruit — hurt a bit, too.

But I’d gotten off easy.

Starting at noon meant missing the early-morning chill, when Maurice says it’s so cold your fingers feel like they’re burning. And if I was ready to call it a day after six hours, how would I have handled 10?

However long I was out there, I went into the day knowing I could sleep in the next morning and nurse my minor wounds. Farm workers get right back to it, toiling from predawn to dusk so that Canadians can eat.

Spending even a few hours in the fields with this resilient crew made me appreciate even more how essential their work truly is. To all of Norfolk’s migrant farm workers, this apple fan salutes you from his core.

Harvest time on the highways

Heirloom apples are ripe for the picking
September 9, 2021