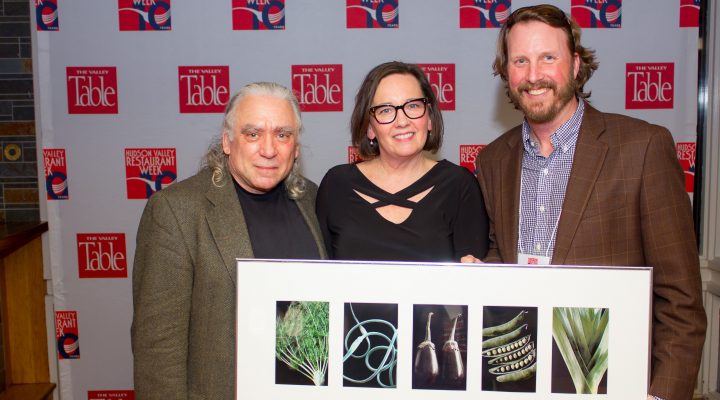 Presenting the award to HVADC Executive Director Todd Erling, Janet Crawshaw, publisher of The Valley Table magazine and founder of Hudson Valley Restaurant Week, cited HVADC’s “leadership and vision in strengthening local agriculture,” noting, “It’s rare that the words ‘agriculture’ and ‘business’ are uttered in the same sentence . . . but since 2007, HVADC has worked with more than 180 ag-related businesses. Its list of success stories reads like a Who’s Who of signature Hudson Valley businesses, including Hudson Valley Fresh, Ronnybrook Farm and Stone Barns Center for Agriculture.”

Founded by Janet Crawshaw and Jerry Novesky in 1998, The Valley Table magazine celebrates the agricultural heritage and cuisine of the Hudson Valley. The magazine and its programs, including Hudson Valley Restaurant Week, connects producers, purveyors, restaurateurs, chefs and consumers across the region in order to drive the “eat & drink local” movement.

The Farm-to-Table Leadership Award was established in 2013 to recognize leaders in building farm-to-table connections. Previous recipients of the annual award include Dr. Tim Ryan, President of the Culinary Institute of America; Sam Simon of Hudson Valley Fresh; John Novi, chef/owner of the Depuy Canal House; and Peter Kelly, chef/owner of Xaviars Restaurant Group.

“Valley Table, Jerry and Janet have always been ahead of the curve in promoting farm-to-table businesses and agritourism in the Hudson Valley, and we are appreciative of their support of HVADC and our clients,” said Erling. “To be included in the company of the caliber, dedication, and leadership of the prior winners of this award is quite remarkable, and it’s especially gratifying to have HVADC’s work acknowledged along with such a group,” he continued.

Winter survival of alfalfa under evaluation