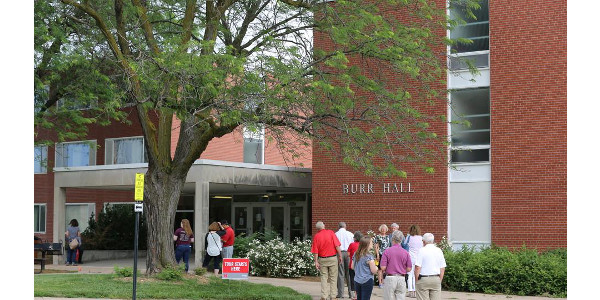 Huskers gather outside Burr Hall during the Burr-Fedde and Friends Reunion on June 10. (Kurtis Harms)

LINCOLN — Steve Waller, dean of the College of Agricultural Sciences and Natural Resources at the University of Nebraska–Lincoln, will be the first to admit that when talks started over two years ago about hosting a reunion for those who have lived in Burr and Fedde halls on East Campus, not everyone thought it was a good idea.

“Some people wondered if anyone would show up to celebrate a residence hall,” Waller said. “My goodness, have we proved them wrong!”

On June 10, nearly 350 people turned out on East Campus for the Burr-Fedde and Friends Reunion. Attendees included residents from every decade since Burr and Fedde were built in 1957, and came from as far away as Kodiak, Alaska.

Campus administrators organized the reunion so former residents could celebrate memories of Burr and Fedde and honor the unique bond formed by East Campus students.

Sandra George, a native of Laurel, Nebraska, lived in Fedde Hall while studying journalism in the late 1970s. Today she resides in Michigan, but still felt it was important to make the trip to Lincoln for the reunion with her friends.

“We were so grateful for the opportunity to return to campus. What makes it so special is that we got to experience this together,” George said.

During the reunion, attendees got to leave their mark on campus. Organizers left Burr Hall Room 131 open for people to leave messages on the walls, desk and the ceiling. In addition, attendees explored areas of campus that likely don’t look the same as they remember. Special tours were given of the new Nebraska Veterinary Diagnostic Center, the Department of Agricultural Economics Commodity Trading Room, and the Massengale Residential Center.

The new center has 240 beds in traditional-style rooms. Upper-class students have the option of living in apartment-style two- and four-bed units that have a total of 134 beds. The open layout, more common area spaces, floor lounges and large meeting spaces better fit the needs of this generation of college students, who often like to study in groups and engage in group activities. It is a floor plan designed to foster the same type of community found in Burr and Fedde halls.

“Burr Hall was great at creating lasting friendships and I think that’s why there are so many people at this reunion,” said Jean Oelsligle, a native of Wakefield, Nebraska, who lived in Burr Hall while studying elementary education in the mid-1960s. Jean will never forget the day she received a call from another Burr Hall resident by the name of Don, who asked her out on a date.

Don came to the university from Tilden to study agronomy. His call led to a date, which eventually led to a marriage. It’s a tale similar to that of many other Burr and Fedde residents who met spouses on East Campus.

“My favorite memory of Burr Hall is meeting my wife,” Don said. “But this place holds so many special memories for all of us and it was fun to come back to where it all began. It still feels like home!”

To cap off the day of campus tours, Valentino’s pizza and catching up with old friends, an evening banquet was held at the Cornhusker Hotel. During the program, Marjorie Kostelnik, dean of education and human sciences, and Mike Boehm, Harlan Vice Chancellor of the Institute of Agriculture and Natural Resources joined Waller to address the attendees.

Kostelnik reflected on the tremendous impact of Fedde Hall’s namesake, Margaret Fedde. In 1914, Fedde began working as an instructor in the home economics department and soon became chairwoman of the department. She held that position until retirement in 1950.

“We have all benefited from the impact Ms. Fedde left on East Campus,” Kostelnik said. “As we move into a new era of learning about individuals, families, schools and communities at this university, we will never forget the tremendous work she did to get us to this point.”

While much of the event was spent celebrating the past, it was also an opportunity to look to the future. Boehm offered his gratitude to the attendees for their support of the university and shared his excitement for what’s to come.

“East Campus is a fantastic living and learning community which you were a part of, and we have every intent on expanding upon that in the future.”

To read more about Burr-Fedde and the new residence center, click here.