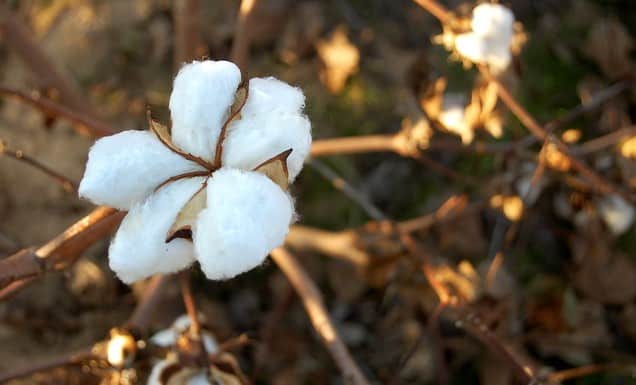 There was still uncertainty where the storm’s path might take it—that’s typical.  But the Mid-South had just previously gotten hit with Laura and, while the Southeast had so far been spared, the crop in some places was 50% or more open and vulnerable.  (Edgar Pierce, Flickr/Creative Commons)

TIFTON, Ga. — I knew we were possibly in for disappointment price-wise when I read a pre-landfall news headline that said that the market was “mulling” Hurricane Sally.  In other words, not sure of what the impacts, if any, might be.

I just thought that was a little strange under the circumstances.  There was still uncertainty where the storm’s path might take it—that’s typical.  But the Mid-South had just previously gotten hit with Laura and, while the Southeast had so far been spared, the crop in some places was 50% or more open and vulnerable.  What is there to be “mulling” about?

Sally made landfall early Wednesday (yesterday) morning near Gulf Shores, AL as a Category 2 storm.  Days earlier, however the projected path took it further west near New Orleans.  Instead, Sally shifted east and tracked across the Florida Panhandle, LA (Lower Alabama), central GA, and is now headed toward the Carolinas.  Portions of Florida, Alabama, and Georgia have received heavy rainfall.  The heaviest rainfall has been mostly 5 to 8 inches but has been much more in some areas.

As of last weekend, on average the AL crop was 55% open, GA 52%, NC and SC 39% and 20% respectively, and Tennessee 29%.  An unscientific poll of me just making a few calls around GA says that losses could be 5% minimum to 15-20% maximum in the hardest hit areas.  Some report they expect little to no loss and some that only got 1-2 inches of rain say it will actually be helpful.  All agree, though, that we now could really use dry and sunny weather for a while.

Prices (Dec futures) advanced to almost 67 cents on Monday this week—up 181 points on “fears” concerning Sally.  Prices stayed above 66 cents until today—closing at 65.85—down 77 points from Monday’s pre-storm high.  The downtick today is said to be due to a lessening of concerns about the impacts of Sally.

Prices may have fallen further had it not been for a very good export report today.  Sales for the week ending Sept 10 were 564,000 bales including 464,700 bales to China.  Shipments continue to slip and were only 210,530 bales.

More storms may yet threaten the crop.  The further along the crop gets, its potential has been reached and its yield and quality can only go downhill from there.

Milkweed pests can be a problem for monarch butterfly lovers

Funds aid in recovery from the financial impacts of COVID-19
April 14, 2021