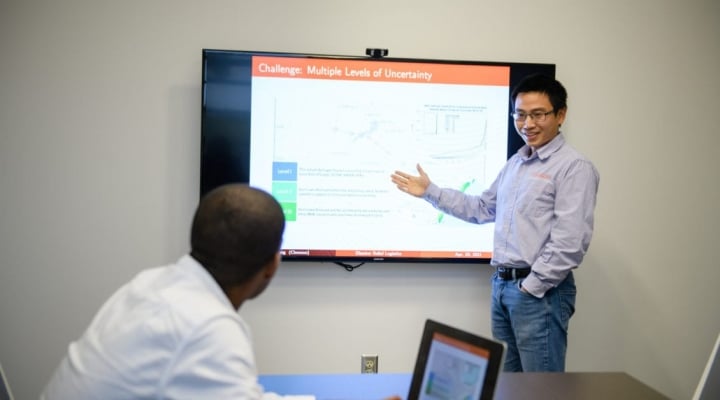 South Carolina’s coastal residents know all too well what it’s like to see a hurricane churning through the Atlantic and wonder whether they should head for higher ground or hunker down and hope the storm passes harmlessly out to sea.

CLEMSON, S.C. — South Carolina’s coastal residents know all too well what it’s like to see a hurricane churning through the Atlantic and wonder whether they should head for higher ground or hunker down and hope the storm passes harmlessly out to sea.

Constantly changing conditions, such as the storm’s track and intensity, can make the decisions agonizingly difficult, but new research led by Yongjia Song of Clemson University could help make it easier to adapt.

Over the next five years, Song and his team will work to create a tool for emergency management officials that will show hurricane paths, their cones of uncertainty, what shelters should open and where relief items such as food and water should be sent over time. The results will update as the storm’s conditions change.

Song, an assistant professor of industrial engineering, is receiving $500,000 through the National Science Foundation’s CAREER program to fund his project.

“It’s going to help government officials to make the plans more adaptive and flexible,” Song said. “It’s also going to help the individual decision makers when they consider evacuation and help them develop their own contingency plans in hurricane season.”

The research will apply to natural disasters that have a slow onset, such as hurricanes and floods. While it would be several years away, Song sees the possibility of eventually using the research to make an app used directly by members of the general public to adjust their plans as hurricanes approach the coast.

Kevin Taaffe, interim chair of the Department of Industrial Engineering, congratulated Song on his CAREER award.

“We celebrate CAREER awards in higher education because they are among the nation’s highest honors for junior faculty members, and they are a sign of future success,” Taaffe said. “The award is a testament to Dr. Song’s hard work and is a well-deserved honor.”

At the heart of Song’s research is some sophisticated math. As part of the project, he plans to create stochastic programming models and an algorithmic framework to improve the solution efficiency. Stochastic programming is a mathematical optimization technique that helps people make decisions under uncertainty and has been applied to a wide range of tasks, such as managing fleets of vehicles and scheduling medical appointments.

Song’s research will give students a chance to work on the cutting-edge in the field of operations research. Among them is Murwan Siddig, a Ph.D. candidate who wants to conduct research and teach in academia after graduation.

“This work helps society, especially here in South Carolina,” Siddig said. “I think using science and engineering tools to help the world and doing something meaningful is a great thing to do. That’s what makes it exciting. It’s a great opportunity to be working on this.”

Also as part of the award, Song plans to use his research to enhance his educational offerings. He will revamp a graduate-level course on network optimization and develop a new Ph.D.-level course on optimization under uncertainty. Song also plans to develop a Creative Inquiry research project for undergraduates, which will include a “real-time hurricane watch.”

Beyond the University, Song plans several workshops on disaster-relief logistics and will invite emergency managers and practitioners from South Carolina Emergency Management Division (SCEMD) to share insights on current disaster relief practices. He also plans to create outreach activities for K-12 students and the general public that he plans to make available in Clemson’s STEAM Exhibit at Artisphere.