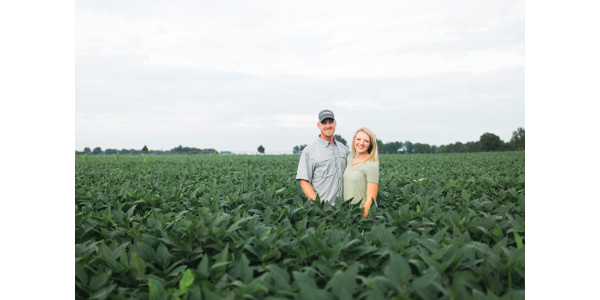 PRINCETON, Ky. — Houston Howlett and his wife, Katy, of Camp Nevin Farms in Glendale have been selected by the Kentucky Soybean Association to represent the Commonwealth as its 2020 American Soybean Association Corteva Agriscience Young Leaders. This national program allows young soybean farmers from around the nation to gather for a challenging leadership experience. The program offers the opportunity for participants to enhance their leadership skills as well as meet and learn from other young leaders.

Houston earned a bachelor’s degree in agricultural economics with a minor in business from the University of Kentucky. Following graduation, he took a role in the corporate world, but soon realized that his heart was in farming. He then worked as a field agronomist for Peterson Farms in Loretto before pursuing what is now known as Camp Nevin Farms. Howlett credits his father and the Petersons for their help in the establishment of his current operation.

The Young Leader program is designed for couples, and Houston’s wife Katy is an active participant in Camp Nevin Farms. She is a graduate of the University of Louisville with a bachelor’s degree in mechanical engineering and is expected to complete a Masters of Business Administration degree in December. She is employed with Altech as an Information Systems Functional Lead and has been distinguished as one of Altec’s emerging leaders.