Home » How you can help stop a plant pest 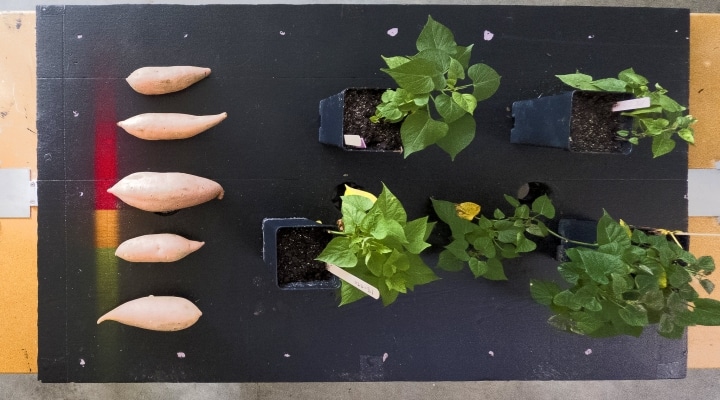 As they check their fields and gardens this summer, growers are the first line of defense in preventing the spread of a microscopic worm threatening vegetable crops in the Southeast, including sweetpotatoes. (photo by U.S. Department of Agriculture, creative commons/flickr.com)

RALEIGH, N.C. — As they check their fields and gardens this summer, growers are the first line of defense in preventing the spread of a microscopic worm threatening vegetable crops in the Southeast, including sweetpotatoes.

The guava root-knot nematode — Meloidogyne enterolobii or M.e., for short — spreads aggressively and causes more severe damage than other nematode species, says Adrienne Gorny, a North Carolina State University expert on nematodes and their management. M.e. causes abnormal root growth, creating galls on root crops such as sweetpotatoes, and it can infect many other crops, including watermelon, tomato, pepper, carrot, squash, cucumber, soybean, cotton and tobacco.

“M.e. causes significant crop loss and puts exports at risk,” Gorny says. “As scientists, we’re asking for help from growers and gardeners to report signs of this nematode. Prevention is the best medicine and limiting spread of M.e. is the best management plan.”

M.e. has been found in 13 counties in North Carolina since 2019, triggering quarantines and regulations on out-of-state shipments of sweetpotato seed and slips, Gorny adds. South Carolina, Florida and Puerto Rico have confirmed cases, and monitoring is underway in Louisiana and Georgia, though it hasn’t been found there yet.

NC State scientists are part of a multistate FINDMe team, along with researchers from Clemson University, the University of Florida, the University of Georgia, the North Carolina Department of Agriculture and Consumer Services, and the U.S. Department of Agriculture’s Agricultural Research Service. The U.S. SweetPotato Council, South Carolina Watermelon Association, and Georgia Fruit and Vegetable Growers Association are partners.

Here’s how to detect and report suspected M.e.