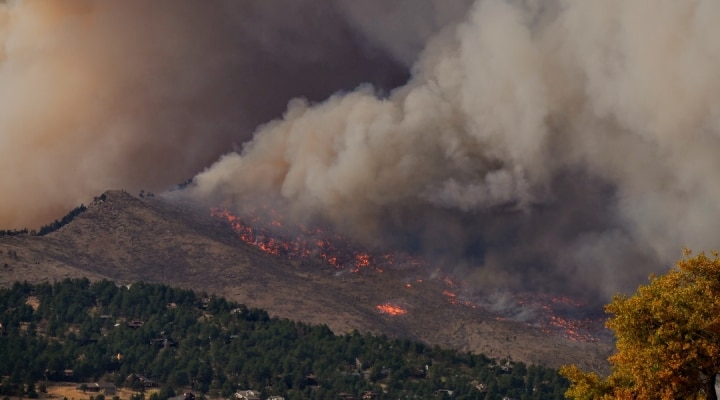 When it comes to climate, wildfires occupy an unusual space: they are driven by climate change and they help drive it. (Photo by Malachi Brooks on Unsplash)

VICTORIA, Canada — As the 2021 wildfire season begins to unfold, the memories of past seasons linger — in the lungs of people, in the communities and landscapes that burned and in the atmosphere, where greenhouse gases from wildfires continue to warm our planet.

Wildfires wreaked havoc across the world over the past year. In Australia, bushfires spanning 2019-20 captured public attention as videos of scorched koalas and wallabies made the rounds on the internet.

Fires burned in Arizona and Colorado during the early waves of COVID-19. In Siberia, boreal forests and tundra fires burned in the far north. And as fall arrived, Washington and Oregon began to burn, with the consequences felt across the United States and into Canada as smoke and COVID-19 kept people indoors.

When it comes to climate, wildfires occupy an unusual space: they are driven by climate change and they help drive it. As this vicious cycle plays out and predictions of extreme future fire seasons continue, the need for human intervention to interrupt this cycle has never been more clear.

Climate change is raising average global temperatures, bringing with it longer droughts, with cascading effects for forests and wildfires. These impacts are highly place-dependent — they are determined by the ecology an ecosystem and its history of disturbance, like wildfires, insect outbreaks or logging.

Across many forest types, increasing temperatures and droughts dry out fuels, including vegetation like dead trees and fallen branches, more quickly and completely, priming them to burn.

In some forests in California and British Columbia, climate impacts can reduce snowpack and speed up spring snow melt, which can lead to even drier vegetation and increase fire risk. In ecosystems plagued by drought, like areas of the southwestern U.S., long stretches without rain can kill trees and leave dead wood ready to burn.

As a driver of climate change, wildfires release huge quantities of greenhouse gases to the atmosphere. In British Columbia, extreme fire years in 2017 and 2018 each produced three times more greenhouse gases than all other sectors of the province combined. While trees can and do regrow after fire, building back carbon takes time, which is precisely what we lack in the fight against climate change.

That’s not to say that climate change is the only thing driving massive wildfires, nor is greenhouse gas release the only consequence. People, specifically European colonizers in North America, have created and perpetuated conditions that increase the risk of large, severe fires. We are just one of many species that suffer from the consequences.

Fire has long played an important role in maintaining the health of many types of forest. For example, lodgepole pine relies on fire to reproduce by melting the resin that releases its seeds.

In the early 20th century, bans on controlled Indigenous burning and policies of fire suppression interrupted the fire cycle with which forests evolved, and removed regularly occurring fires from forested areas.

The exclusion of fire from temperate landscapes has disrupted the mosaics of ecosystems and recently burned areas that had once moderated fire spread and behaviour. Logging and timber practices, like clear cutting and replanting, have also modified fire risk by favouring stands of coniferous trees nearly identical in age that can quickly carry and spread fire.

How do wildfires alter the carbon sink?

Further complicating the grim picture of wildfires is the growing expectation among governments and policy-makers that forests and trees will counterbalance and offset our continued fossil fuel use. Increasingly severe and large wildfires could derail that plan.

Most forests are carbon sinks, meaning they take up more carbon than they release, with the amount of carbon taken up varying with age. As plants photosynthesize, they take carbon dioxide out of the atmosphere and integrate it into their leaves, roots and biomass. Over time, this leads to large carbon stocks in forests, stored in vegetation and importantly, soils. In cold, high-latitude environments, even more carbon is stored in permafrost soils.

Fires, along with other disturbances, release this carbon into the atmosphere, reducing the carbon stocks that have built up over time. Wildfires can also initially reduce a forest’s capacity to pull carbon out of the atmosphere, also called “sink strength.” Severe fires can inhibit forest regrowth and can change the species composition of the forest. Altogether, wildfires increase the amount of carbon leaving forests and can decrease the amount coming in.

While predicting the intensity of fire seasons isn’t foolproof and has its own limitations, many regions in Canada and the U.S. face a greater than average risk for fires this summer, according to predictions. Extreme drought is occurring across the western U.S. and the Canadian Prairie provinces, the effects of which are reflected in the elevated fire risk predicted for those same coastal and southwestern areas.

Humans, however, can also intervene to interrupt this cycle, with practices like prescribed burning and forest thinning that can increase forest resilience. This is an active area of research and many scientists, including a team from Canada and the U.S., are working to develop scientifically sound interventions.

Climate change doesn’t operate like an on/off switch, meaning wildfires aren’t part of a “new normal.” We are experiencing the effects of climate change, but they will neither be consistent nor uniform. Rather, climate change is like a slide and, when it comes to wildfires, we are quickly spiralling downward.

Carly Phillips works for the Pacific Institute for Climate Solutions at University of Victoria. She previously worked at the Union of Concerned Scientists and Woodwell Climate Research Center.

Growing the ag work force, one classroom at a time