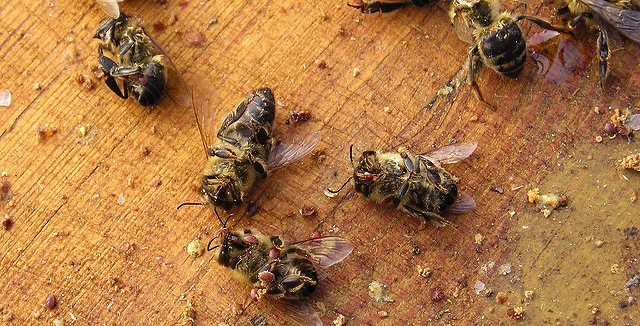 The mite's ability to hitchhike on wandering bees, the infections it transmits to bees, and the density of colonies in managed beekeeping settings make for a deadly combination. (Photo by Maja Dumat - CC BY 2.0)

ANNAPOLIS, Md. — As the managed honey bee industry continues to grapple with significant annual colony losses, the Varroa destructor mite is emerging as the leading culprit. And, it turns out, the very nature of modern beekeeping may be giving the parasite the exact conditions it needs to spread nearly beyond control.

In an article to be published next week in the Entomological Society of America’sEnvironmental Entomology, researchers argue that the Varroa mite has “co-opted” several honey bee behaviors to its own benefit, allowing it to disperse widely even though the mite itself is not a highly mobile insect. The mite’s ability to hitchhike on wandering bees, the infections it transmits to bees, and the density of colonies in managed beekeeping settings make for a deadly combination.

In the wild, bee colonies tend to survive despite Varroa infestations, and colonies are usually located far enough apart to prevent mites from hitching rides to other colonies on foraging bees. Wild bee colonies’ natural habit of periodically swarming–when the colony grows large enough that a portion of its bees splinter off to create a new colony elsewhere–also serves as a mechanism for thinning out the density of mite infestations and their associated pathogens. In managed honey bee settings, though, these dynamics are disrupted, DeGrandi-Hoffman says. Colonies are kept in close proximity, and swarming is prevented.

DeGrandi-Hoffman, USDA-ARS colleague Henry Graham, and Fabiana Ahumada of AgScience Consulting, conducted an 11-month study of 120 honey bee colonies in one commercial bee operation, comparing those treated with mite-targeting insecticide (miticide) in the spring and fall with those treated only in the fall, and they found no significant difference in the results: more than half of the colonies were lost across the board. This aligns with what has been seen by beekeepers and researchers alike in recent years: Varroa populations continue to grow even after being treated with effective miticides. But why? The answer may be in its dispersal mechanisms.

The researchers also conducted mathematical simulations of Varroa mite population dynamics to examine the effects of both migration of foragers between colonies and swarming. When bees can wander into other colonies–either to “rob” them of their honey or because they’ve simply lost their way–Varroa populations across colonies climb. Likewise, prohibiting colonies from splintering periodically via swarming also leads mite populations to rise.

In the wild, DeGrandi-Hoffman and her colleagues note, driving a colony to collapse is againstVarroa mites’ own interest; if the colony dies, the mites die with it. But in commercial beekeeping settings, increasing infestation of a colony activates the dispersal mechanisms the mites need to spread. Weakened foragers are more likely to wander to other colonies, and weakened colonies are more likely to see foragers from healthy colonies visit to rob them of honey. In both cases, mites can hitch a ride from one colony to another.

It all adds up to a critical point for managed honey bee industry. The researchers cite the need for new integrated pest management strategies to treat Varroa destructor as a migratory pest, as well as for further research into the specifics of Varroa dispersal.

“Colony losses in the U.S. are at unsustainable levels for commercial beekeepers. These beekeepers supply colonies for the pollination of crops that represent one-third of U.S. agriculture and are essential components of heart healthy and cancer-prevention diets,” says DeGrandi-Hoffman. “This research provides evidence that the tried and true ways of controlling Varroa are no longer feasible, and that new methods that are designed for control of a migratory pest are required.”

—Entomological Society of America
via EurekAlert!

The good side of stinging nettles