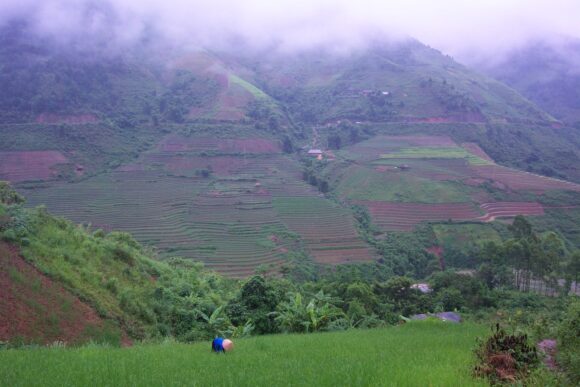 NEW BRUNSWICK, N.J. — How can some of world’s biggest problems – climate change, food security and land degradation – be tackled simultaneously?

“We argue that if we want to have an impact on multiple problems, we need to be smart about what options get us multiple benefits and which options come with potential trade-offs,” said lead author Pamela McElwee, an associate professor in the Department of Human Ecology in the School of Environmental and Biological Sciences at Rutgers University–New Brunswick. “We found that many of the better-known solutions to climate mitigation and land degradation come with a lot of potentially significant trade-offs.”

The idea of planting trees in vast areas to remove carbon dioxide from the air and reduce the impact of climate change, for example, has attracted a lot of attention, with some claiming it’s the best “low-hanging fruit” approach to pursue, McElwee said. But large-scale tree planting could conflict directly with food security because both compete for available land. It could also diminish biodiversity, if fast-growing exotic trees replace native habitat.

Some potential options that don’t get as much attention globally, but are quite promising with fewer trade-offs, include integrated water management, reducing post-harvest losses in agriculture, improving fire management, agroforestry (integrating trees and shrubs with croplands and pastures) and investing in disaster risk management, she said.

The study examined possible synergies and trade-offs with environmental and development goals. It was based on a massive literature review – essentially 1,400 individual literature reviews – conducted by scientists at many institutions. They compared 40 options to tackle the interrelated problems of climate change, food security and land degradation and looked for trade-offs or co-benefits with 18 categories of services provided by ecosystems, such as clean air and clean water, and the United Nations’ 17 sustainable development goals. The work was done as part of an Intergovernmental Panel on Climate Change (IPCC) Special Report on Climate Change and Land released last year. Such reports offer only highlights, and this study includes all the details.

Several interventions show potentially significant negative impacts on sustainable development goals and ecosystem services. These include bioenergy (plant-based sources of energy such as wood fuels or ethanol) and bioenergy with carbon capture and storage, large-scale afforestation and some risk-sharing measures, such as commercial crop insurance.

The results show that a better understanding of the benefits and trade-offs of different policy approaches can help decision-makers choose the more effective – or at least the more benign – interventions.

“Policy officials can’t always undertake the kind of work we did, so we hope our findings provide a useful shorthand for decision-makers,” McElwee said. “We hope it helps them make the choices needed to improve future policy, such as strengthened pledges to tackle climate mitigation under the 2015 Paris Agreement. There are a lot of potential steps for reducing carbon emissions that aren’t as well-known but should be on the table.”