Home » How to save N.J. from rising tide? translating science to action 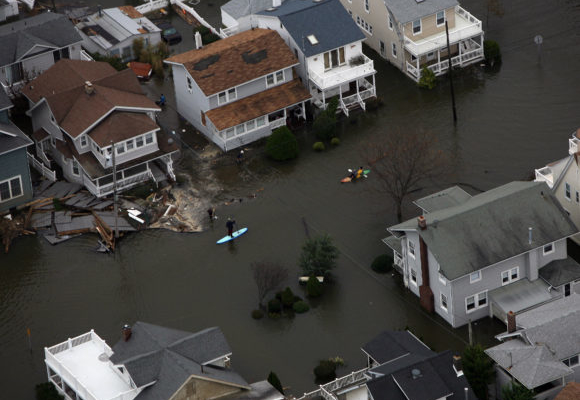 As we approach the seventh anniversary of Superstorm Sandy, we are asked – as we have been every autumn since 2012 – “Are we better prepared for the next Sandy?” Our answer: In some places and with respect to some structures and systems, we probably are, but in many others we are not or we won’t know until the next big storm. (photo by Governor’s Office/Tim Larsen)

NEW BRUNSWICK, N.J. — As we approach the seventh anniversary of Superstorm Sandy, we are asked – as we have been every autumn since 2012 – “Are we better prepared for the next Sandy?” Our answer: In some places and with respect to some structures and systems, we probably are, but in many others we are not or we won’t know until the next big storm.

We have been working together on issues related to preparedness in the face of sea-level rise in New Jersey since before Superstorm Sandy, but that seminal event provided an opportunity to further our applied research and advance a dialogue on an issue that, even post-Sandy, some policymakers and elected officials still shy away from.

Rutgers, with a mission of service to New Jersey, is in a unique position to provide continuity to address the factual realities of climate change independent of politics.  As “pracademics” – or academicians who also are practitioners – we translate science to inform policy and action for local communities as well as specific sectors of society that are affected by sea-level rise. We are privileged to be at Rutgers, where we collaborate with colleagues from across the university in the natural and social sciences, engineering, health, planning, policy, law, communications and humanities, so we can take transdisciplinary approaches to our work. We also have access to the communities we serve through field stations such as the Jacques Cousteau National Estuarine Research Reserve.

One example of where we bridge between the university and community is work we conduct for the New Jersey Climate Change Alliance, a diverse nonpartisan network that advances evidence-informed climate change strategies at the state and local levels in New Jersey. Since 2011, the Rutgers Climate Institute and the Bloustein School of Planning and Public Policy have facilitated the Alliance, which formed a year before Sandy, a storm that reinforced the value of its mission. On behalf of the Alliance, we conduct research and analyses, develop user-friendly decision-support tools and educational and outreach materials and conduct events so New Jerseyans can better understand and address climate change.

At the Alliance’s request, we convened a Science and Technical Advisory Panel of experts to identify and evaluate the most current science on sea-level rise projections, coastal storms and resulting flood risk; to consider the implications for the practices and policies of New Jersey stakeholders; and to provide practical options for them to incorporate science into risk-based decision processes. To complement this process, we brought together a panel of resilience practitioners who provided feedback to the science panel on barriers and opportunities for integrating the science panel’s conclusions into practice.

We conducted additional research to better understand how municipal decision-makers and practitioners use coastal hazard data, and to understand pertinent local, state and federal regulatory frameworks and the degree to which coastal climate change impacts are addressed in New Jersey.

We have learned that municipal decision-makers and professionals agree there is a greater recognition regarding sea-level rise impacts in New Jersey coastal areas as a result of increased awareness following Superstorm Sandy and a greater support for protective regulatory measures. But they also desire a more holistic approach to resilience guided by a statewide vision for planning and implementation. They also have concerns that the post-Sandy emphasis on elevating structures may provide a false sense of security regarding long-term resiliency. They fear residents will avoid evacuating during storms because they fail to consider the roadways, infrastructure and critical facilities that remain exposed and non-resilient. They note sea-level rise planning numbers need to be consistent within and between state agencies and communicated to local decision-makers. They suggest that integrating sea-level rise projections with local knowledge about historic flooding can inform decision-making, and that using historic flood data as a reference point can help to communicate current and future impacts.

Preparedness for sea-level rise and coastal flooding involves collaboration among many actors, including municipal, state and federal decision-makers; public and private sector leaders; natural and social scientists; and residents and businesses in coastal communities. At Rutgers, we advance our research while we apply our results. Two examples:

We recognize planning decisions have implications far into the future. Such decisions must consider many factors and are not to be taken lightly. It is our hope that by providing evidence-based information, we can help New Jerseyans adapt to sea-level rise. And we hope that before the next major storm hits, we will indeed get to an October where we can say: Yes, we are indeed better prepared than we were in 2012.

Funding still available for a second round of ODAP payment
June 22, 2022