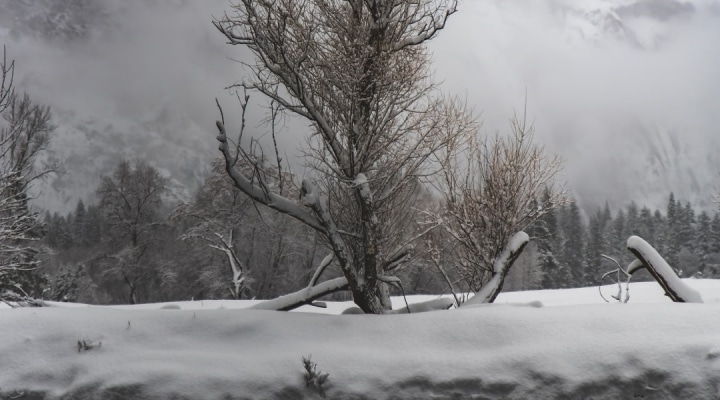 Most trees and shrubs will recover from such trauma, sending up new sprouts in the spring to replace missing limbs. But there are steps you can take to mitigate the damage and help the plant heal. (Photo by Casey Horner on Unsplash)

NEW YORK — The deadly winter storms that have wreaked havoc in large swaths of the country recently can also damage trees and shrubs.

Snow can of course enhance the look of yards and gardens, visually knitting together the plants, fences, even lawn furniture in a sea of white. But it also can bring down branches. Or worse, snap a major limb on a tree or split a bush wide open.

Most trees and shrubs will recover from such trauma, sending up new sprouts in the spring to replace missing limbs. But there are steps you can take to mitigate the damage and help the plant heal. There also are ways to help protect trees from the weather.

The ragged edge from a broken branch exposes a lot of surface area, which slows healing, so cut back any break cleanly to leave a surface that heals better.

Many gardeners’ first inclination, however, before doing any pruning, would be to save what is broken, merely putting the broken limb back in place and holding it there the way a doctor sets a broken bone. It can be done, just as if it were a large graft.

As with any graft, success is most likely if plant parts are lined up, held still and not given the opportunity to dry out. So attempt this fix immediately, especially for evergreens, which lose water through their leaves all winter. Re-align the break and then immobilize the joined parts with stakes and splints. After binding everything together tightly (I like to use electrical tape), seal in moisture by painting every cut part with “Tree-Kote” or some other moisture-resistant barrier.

Leave the “cast” in place throughout the next growing season. Keep an eye out for strangulation from the bindings, slitting and reapplying them if they become too tight. Depending on the size of the branch, it may need some staking for an additional year.

There’s really no harm in attempting to “set” a broken limb. If the repair fails, the plant most likely will send out a new sprout below the break, just as if you had cut it back. In that case, do cut the broken stub back cleanly.

Pines are among the few trees that will not send out new sprouts from old wood. You can sometimes still coax such a plant back to its former glory by bending a younger branch near the break to about the position of the lost limb. The stub from the lost limb makes a convenient handle on which to tie the younger replacement, but should eventually be cut back cleanly to its origin.

Limb breakage, like many other gardening problems, can in large part be avoided by thinking ahead. Like deciding what to plant: Expect more limbs on the ground beneath fast-growing trees such as silver maple, willow and cottonwood, because their wood is weaker.

And any tree is stronger if trained in its youth to have just a single, upright main leader, off which grows well-spaced branches at wide angles. The reason the widely planted, ornamental Bradford pear trees have such a tendency to split their heads — from snow or even just age — is their natural tendency to grow many upright limbs clustered together.

Limiting the number of upright limbs on an evergreen such as arborvitae leaves fewer to break off, and a narrower top to better shed snow.

For at-risk plants, forget about shoveling your walkways when you see snow starting to accumulate. Instead, run outside with your broom to brush snow from plant limbs. Don’t knock the branches and don’t bother with them at all if ice has formed, or they might snap off. Sweep snow gently upward and off.

Lee Reich writes regularly about gardening for The Associated Press. He has authored a number of books, including “Weedless Gardening” and “The Pruning Book.” He blogs at http://www.leereich.com/blog. He can be reached at garden@leereich.com.

Register for the 2021 Pork Industry Forum