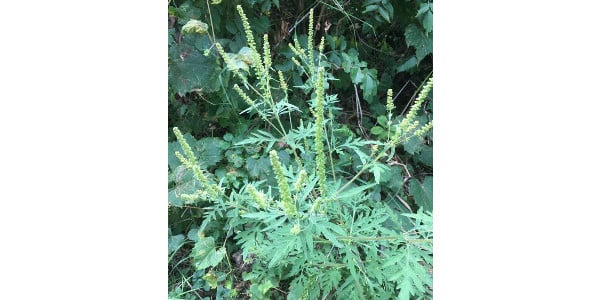 EAST LANSING, Mich. — Common ragweed (Ambrosia artemisiifolia L.) can be a significant weed species in Christmas tree production. Ragweed competes for water and nutrients. When it gets larger, it can make shearing and harvest difficult and its pollen can cause allergic reactions. In addition, ragweed is resistant to several herbicides, which make proper identification critical.

Common ragweed is a broadleaved herbaceous summer annual plant, which belongs to the family Asteraceae. This weed is native to North and South America. According to NPIN, 2020, Ambrosia artemisiifolia is also known as annual ragweed, low ragweed, American wormwood, Roman wormwood and tassel weed. Common ragweed is considered as an invasive weed species, which is highly competitive with other plants, according to Jordan et al., 2007. The plants emerge in late spring and bloom from July to October.

According to Odero et al., 2011, common ragweed is found in a wide range of habitats (Figure 1) such as cultivated fields, landscapes, orchards, roadsides and unmaintained areas. It also grows profusely in open grasslands, Christmas tree production fields, and even in nurseries.

Common ragweed seeds remain dormant from fall throughout winter season. Seeds require winter chilling to overcome primary dormancy. Seeds start to germinate in April or May, emerging from soil depths of 2 inches or less. According to Hartzler and Vittetoe, 2020, high temperatures usually inhibit seed germination. The seedling stem and cotyledons are green, often having purple spots underneath.

It is a short-day annual plant that can grows up to 24 inches in height. The stem is erect, hairy, green to purple with branching on the upper part. The leaves are compound, fern-like, pinnately divided, deeply cut into number of lobes, usually wider at base than at tips (Figure 2).

According to research from FNA, 2006 and Odero et al., 2011, female heads are present in axillary clusters below male flowers. Common ragweed blooms from July to October. Each plant produces approximately one billion wind-dispersed pollen grains, which can be highly allergenic for people with hay fever. The flower color is green initially, which turns to yellow or brown on maturity.

Common ragweed sets seeds in late summer or early fall, producing 2-4 millimeter green to brown indehiscent fruits in clusters. A small single seed is enclosed within each fruit, which has several longitudinal ridges that end in short spines, looking like a crown, according to Odero et al., 2011.

Common ragweed plants can produce 32,000 to 62,000 seeds per plant during the entire growing season, according to Jordan et al., 2007. The seeds are variable in size and are generally about 3.5 millimeter long and 2.5 millimeter broad. They are usually dispersed in proximity of mother plant, pertaining to the small size of seeds. The seeds have very little to moderate persistence in soil. According to NPIN, 2020, common ragweed propagates by seeds or by rhizomes. Generally, the seeds enter a dormancy period in winter season to germinate in next spring.

Ambrosia coronopifolia (perennial or western ragweed) is distributed in areas as that of giant and common ragweed but mostly occurs in dry habitats. The plants have bushy growth habit and leaves are not as deeply divided as common ragweed.

In the Weeds podcast on farm financial decisions

The atrocious summer 2021 growing season in the Treasure Valley of Oregon and Idaho
August 29, 2021