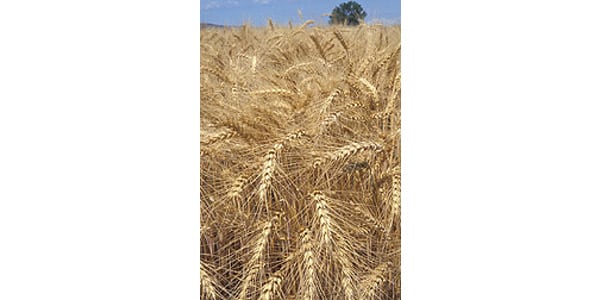 Wheat producers in the Central Plains need their soils to have sufficient levels of a key nutrient. (Photo by Michael Thompson)

WASHINGTON, D.C. — A common obstacle to bountiful wheat harvests in the Central Plains is more pervasive than many growers realize, but a study led by the Agricultural Research Service (ARS) spells out how it can be readily overcome.

Mary Guttieri, who is based at the Center for Grain and Animal Health Research Unit in Manhattan, Kansas, and partners at Kansas State University show that wheat producers in the region could boost their yields and the quality of their wheat by making sure their soil has enough sulfur.

Growers across 12 million acres of Kansas, Oklahoma and Colorado produce a hard red winter wheat that’s used to make breads, biscuits, tortillas, packaged flour and other products. The wheat must take in sulfur from the soil to build up the proteins required to produce the strong, elastic doughs that bakers prefer.

Crop varieties developed over the past 20 years have been increasingly productive, sometimes extracting more sulfur from the soil than what growers have been putting down in fertilizer treatments, Guttieri says. Enforcement of the federal Clean Air Act also has reduced sulfur emissions from industrial plants and vehicles, so less sulfur is returning to the soil from the air and rainwater. Sulfur deficiencies also can go unrecognized because the yellow discoloration it causes in wheat can be confused with nitrogen deficiency, Guttieri says.

In their study, Guttieri and her colleagues applied sulfur at the rate of about 20 pounds per acre for two years in the kind of sulfur-depleted soils that are common in the region. They compared the yield and quality with wheat produced without any sulfur treatment. They found that the sulfur increased yields by 52 percent and produced wheat with more of the proteins needed to produce a desirable dough.

The results also showed that adding sulfur sharply reduced concentrations of asparagine in the wheat, which means a reduced potential for acrylamide to form in products made from the wheat. Acrylamide is a potentially toxic compound that can form in wheat products, potatoes and other foods when they are cooked at high temperatures.

The findings were published in the May issue of the Journal of Cereal Science. ARS researcher Tara Wilson, who works in Guttieri’s lab, was lead author, Guttieri was lead senior author, and co-authors included ARS chemist Michael Tilley, and Nathan Nelson and Allan Fritz from the Kansas State University Department of Agronomy. The study was partially funded by the Kansas Wheat Commission. Grain Craft, which is the nation’s largest independent flour miller, milled the grain and evaluated the mixing characteristics of flour from the study.

Guttieri is advising wheat growers to check their soils for sulfur levels, along with nitrogen levels, when they have the soils tested prior to fertilizer application. “When growers learn about this, it can be like a light bulb going on for them. They realize this is something they either have to address right away or keep an eye on,” she says.

The paper can he found here.

What do COVID-19 and climate change have in common?