Home / National / How Native American food is tied to stories
A new user experience is coming! We'll be asking you to login to your Morning Ag Clips account March 1st to access these new features.
We can't wait to share them with you! Read more here. 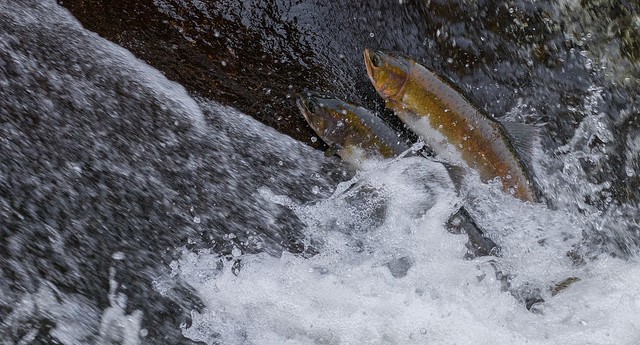 The recent Supreme Court case is a reminder that traditional food, such as salmon, is more than just food – it is a connection to ancestral knowledge that holds a deeper religious meaning within the natural world. (Andrew E. Russell, Flickr/Creative Commons)

MISSOULA, Mont. (THE CONVERSATION) — The U.S. Supreme Court upheld a lower court ruling, on June 11, that asked Washington state to remove culverts that block the migration of salmon. The ruling has significant implications for Northwest Coast tribes, whose main source of food and livelihood is salmon.

The legal decision stems from the 1855 Stevens treaties when Northwest Coast tribes retained the “right to take fish” from their traditional homelands. Fighting to protect salmon habitat, however, is more than just upholding tribal rights. Salmon is viewed as sacred.

As a scholar of environmental history and Native American religion, I have looked at how indigenous people find religious meaning in the natural world and traditional foods.

This latest Supreme Court case coincides with a resurgence of interest among a new generation of scholars and activists who are learning about and reviving indigenous food systems.

Indigenous foods in the ‘New World’

Indigenous people from around the world revere certain traditional foods as sacred. Like salmon in the Northwest U.S. and Canada, corn or maize has, for millennia, been the most important food for indigenous communities, in Mexico and Central America.

Contemporary scientists believe the ancient Mayan were skilled agriculturalists who strategically developed corn around 6,000 years ago. Science writer Charles Mann for example, describes that the creation of corn was not accidental but “a bold act of conscious biological manipulation” by the Mayan.

The Mayan, however, believe that corn is primordial and a part of their creation stories. They tell how the gods successfully created humans out of corn in the “Popul Vuh,” a written version of their timeless oral narratives – one reason corn is deeply revered.

Today, the Mayan and other indigenous groups of Mexico and Central America hold ceremonies for corn at planting time, throughout the growing season and at harvesting time.

The stories of sacred foods have deep value in indigenous cultures. As I learned from my grandmother, the Blackfeet viewed the wild prairie turnip, known botanically as Psoralea esculenta, as sacred.

But colonization had an impact on how this knowledge passed down. My grandparents attended a Catholic boarding school on the Blackfeet reservation. The priests discouraged the use of indigenous foods and taught them about “American foods.”

They exchanged wild prairie turnips for garden vegetables, like carrots, and wild game meat for domesticated beef. My grandparents also learned about completely new foods such as wheat flour and dairy products. The nuns taught my grandmother how to bake bread and churn butter.

My grandparents, however, continued to learn about Blackfeet religious practices and Indigenous foods from their grandmothers. They passed that knowledge on. Although, as a Native American, I know this is not true for many homes today.

The good news is that there is renewed interest among young indigenous activists, scholars and chefs to research and write about this ancestral knowledge.

Activist and writer Abaki Beck’s oral history project, for example, explores the impact of colonization on indigenous food systems. She interviewed Native American elders to help the next generation understand the health benefits of indigenous foods. She learned how some traditional indigenous herbs could replace over-the-counter medications and wild berries could be a healthier substitute for sugar in muffins and smoothies.

Scholar Elizabeth Hoover, interviewed elders and the Mohawk community about their fight against contamination of their land in upstate New York. She highlighted the resistance of indigenous people to safeguard their traditional food systems.

The recent Supreme Court case is a reminder that traditional food, such as salmon, is more than just food – it is a connection to ancestral knowledge that holds a deeper religious meaning within the natural world.

This article was originally published on The Conversation. Read the original article here: http://theconversation.com/how-native-american-food-is-tied-to-important-sacred-stories-97770.

–Rosalyn R. LaPier , The University of Montana
The Conversation