Home / Pennsylvania / How much more can dairy farmers endure? 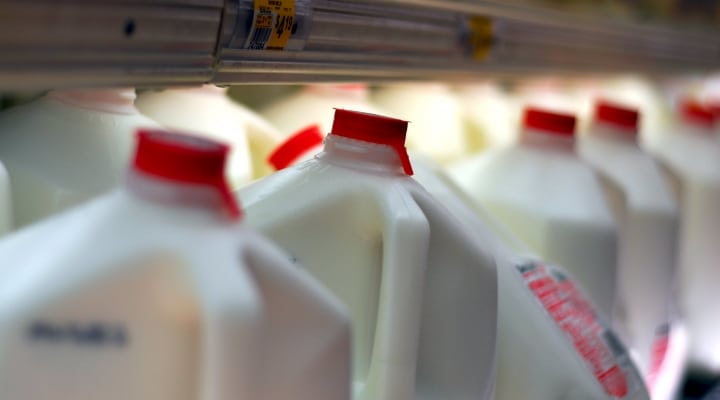 With the announcement of the value of milk used for manufacturing dairy products, it’s almost certain that the statistical price paid to dairy farmers for their May’s production will probably go under $13 per cwt. (hundred pounds) in Federal Order #1.  Also, please remember the Class I price (milk used to bottle milk) has plummeted to $14.67 per cwt. for the month of June. (photo by Guy Montag, Creative Commons/flickr.com)

MESHOPPEN, Pa. — With the announcement of the value of milk used for manufacturing dairy products, it’s almost certain that the statistical price paid to dairy farmers for their May’s production will probably go under $13 per cwt. (hundred pounds) in Federal Order #1.  Also, please remember the Class I price (milk used to bottle milk) has plummeted to $14.67 per cwt. for the month of June.

In addition to the terrible prices, many dairy farmers are calling regarding of the problems they are having in receiving monies that are geared for the dairy farmers.

Other dairy farmers are complaining that their credit scores are being used against them on receiving their payments, and/or not qualifying for loans.

It’s easy to understand that many dairy farmers are witnessing their credit scores decrease when these same dairy farmers haven’t received a fair price for their milk since 2014.  To make things worse for dairy farmers, the milk prices they are receiving are equal to the prices in 1980.   When you recognize these low milk prices being paid to dairy farmers, coupled with Covid 19, and now with much of the nation is reeling over racial tension, one can only wonder when normality will return to our dairy farmers, and all agriculture producers (plus society in general).  The pricing problems facing dairy farmers could be avoided if the Specter-Casey bill (formerly known as S-1640, the Federal Milk Marketing Improvement Act) could have been passed.

Also, the problems that dairy farmers are experiencing obtaining their needed monies would have been prevented if the proper authorities had paid more attention to the current proposal that Pro-Ag has been promoting.  This proposal was called the Dairy Farmers’ Survival and Hope Act.  The Act did not call for dairy farmers to receive any direct payment, but instead, the government would have contributed the same amount of money that dairy farmers are supposed to receive, and this money would have gone to all Federal Milk Marketing Orders, which would have shored up the prices for all dairy farmers.  But again, sensible programs are not listened to.  Were the dairy farmers supporting our proposal?  Yes.

A couple years ago, we received several calls from dairy farmers in the Western part of New York State.  They were non-members that were threatened by a large dairy co-op to de-pool producers or simply no longer market their milk. After talking to many dairy farmers, Pro-Ag submitted a proposal to the administrators of Federal Order #1, which would have allowed the same dairy farmers to have their milk marketed without being a member of the co-op.  Finally, someone in the dairy division rejected our proposal.  I assume the majority of dairy farmers joined the co-op, or else sold their cows.

Now, the same thing happened to scores of dairy farmers that were threatened the same way in Pennsylvania.  This time, the attorney for DFA (Dairy Farmers of America co-op) made the same proposal to the PMMB (Pennsylvania Milk Marketing Board), calling their proposal the same one that Pro-Ag had submitted to the Federal officials.   This time, the proposal did not fall on deaf ears.  The PMMB approved the Pro-Ag proposal as submitted by DFA.   One more time, the PMMB supported a sensible program for dairy farmers.  Too bad the Federal people don’t listen as well as the PMMB.