Subscribe
Home / Minnesota / How did that weed get here? 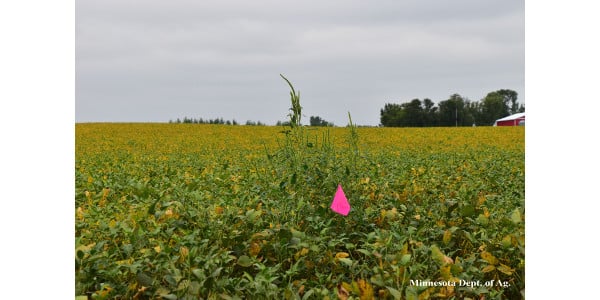 A Palmer amaranth plant found in a soybean field in Redwood County in 2018. (Courtesy of Minnesota Department of Agriculture)

Another pathway for introducing weed seed is screenings. Screenings are the by-products from cleaning seed to prepare it for sale to farmers for planting. Screenings are also produced when grain is cleaned. Screenings can be used for feed, roughage, bedding, and compost. In 2018, Palmer amaranth was identified in wheat and sunflower screenings. Those specific screenings were used as a roughage and source of protein for livestock. The manure from that livestock was then spread among various fields and Palmer amaranth was found. A team at the University of Minnesota Extension has refined methods to screen manure for weed seeds so that we can better monitor this pathway going forward. Screenings are also being sampled across the state to help discover Palmer amaranth and possibly other types of noxious weeds.

Machinery, such as combines and other harvesting equipment, are also on the Minnesota Department of Agriculture’s radar. This pathway is a challenge to monitor. When farmers purchase equipment from a different state where Palmer amaranth is present, the equipment may arrive in Minnesota already contaminated with Palmer amaranth seed. Mowing equipment may also present a risk if used in an infested area. Custom combining is another potential source, though to date the MDA has not documented custom combining as an introduction pathway for Minnesota. To prevent the spread of weed seed from equipment, make sure to clean seed, chaff, and dirt from equipment before moving to a new location. New technology to limit the spread of weed seeds is on the horizon. Harvest equipment may include a way to separate and grind weed seeds before spreading the chaff back onto the field ultimately slowing the development of herbicide resistant weeds in agricultural fields.

Wildlife, such as migratory birds, are another pathway that is known to help seed move around the nation. However, migratory birds are a challenge to monitor. Cattle or other livestock that are being sold from one state to another are also a potential pathway. Weed seed could be in the gut or intestinal tract as well as stuck in the hoof of an animal. Livestock as an introduction pathway have not been confirmed in Minnesota.

Lessons from the aggressive Palmer amaranth weed help us establish best practices for limiting the spread of all weed seeds. The longer that we can protect Minnesota from Palmer amaranth and other aggressive weeds, the better we protect the health of our agricultural economy.