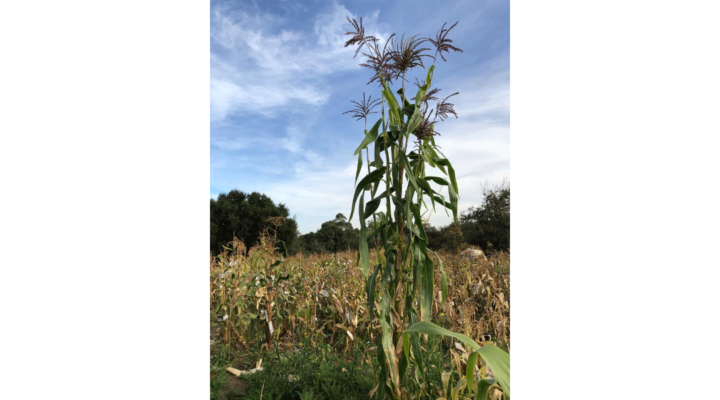 A teosinte plant growing in a corn field on the Stanford University campus. (Courtesy of Yongxian Lu)

PALO ALTO, Calif. — Determining how one species becomes distinct from another has been a subject of fascination dating back to Charles Darwin. New research led by Carnegie’s Matthew Evans and published in Nature Communications elucidates the mechanism that keeps maize distinct from its ancient ancestor grass, teosinte.

Speciation requires isolation. Sometimes this isolation is facilitated by geography, such as mountains chains or islands that divide two populations and prevent them from interbreeding until they become different species. But in other instances, the barriers separating species are physiological factors that prevent them from successfully mating, or from producing viable offspring.

“In plants, this genetic isolation can be maintained by features that prevent the ‘male’ pollen of one species from successfully fertilizing the ‘female’ pistil of another species,” explained Evans.

About 9,000 years ago, maize, or corn, was domesticated from teosinte in the Balsas River Valley of Mexico. Some populations of the two grasses are compatible for breeding. But others grow in the same areas and flower at the same time, but rarely produce hybrids.

It was known that a cluster of genes called Tcb1-s is one of three that confers incompatibility between these rarely hybridizing maize and teosinte populations. Unlike the other two, it is found almost exclusively in wild teosinte. It contains both male and female genes that encode wild teosinte’s ability to reject maize pollen.

In sexually compatible plants, the pollen, which is basically a sperm delivery vehicle, lands on the pistil and forms a tube that elongates and burrows down into the ovary, where the egg is fertilized. But that’s not what happens when maize pollen lands on the pistil, or silk, of a wild teosinte plant.

Evans and his colleagues–Carnegie’s Yongxian Lu (the first author), Samuel Hokin, and Thomas Hartwig, along with Jerry Kermicle of the University of Wisconsin Madison–demonstrated that the Tcb1-female gene encodes a protein that is capable of modifying cell walls, likely making maize pollen tubes less elastic and thus preventing them from reaching the teosinte eggs. When these tubes can’t stretch all the way to the eggs, fertilization can’t occur, and hybrids won’t be possible.

What’s more, because teosinte pollen can fertilize itself, the researchers think that the Tcb1-male genes encode an ability that allows teosinte pollen to overcome this pollen tube barrier building.

“Most plants that depend on wind and water, not birds or insects, for pollination have low species diversity,” said Evans. “But not grasses, which makes their evolutionary history particularly interesting.”

–Carnegie Institution for Science
via EurekAlert!