Home » How are seeds dispersed? 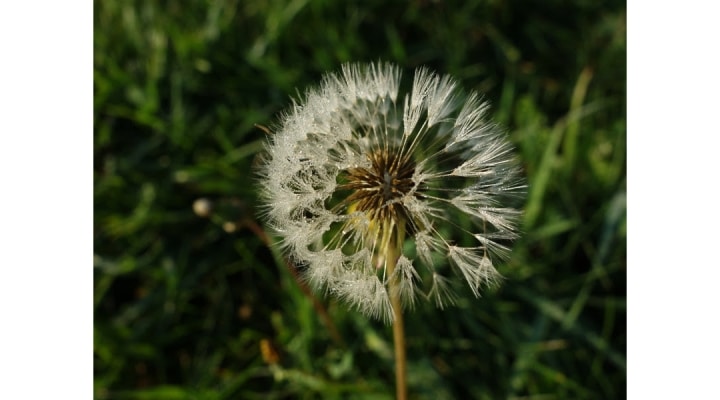 This dandelion flower has already dispersed some of its seed. The pappi are partially closed in response to the morning dew but will open as the temperature increases throughout the day. (Credit: David Tork)

WASHINGTON — Each year, the Crop Science Society of America celebrates seeds. This year’s celebration is from Feb. 7-13th. The featured blog is about seed dispersal in plants, which takes on countless forms. Most dispersal mechanisms fall within the categories of gravity, wind, water, and animal dispersal. The February 7, 2022 Sustainable, Secure Food Blog, written by blogger David Tork, takes a deeper dive into the mechanisms of seed dispersal.

The common dandelion is perhaps the most iconic, and well-known species to use wind dispersal. The windsail-like structure, called the pappus, opens and closes in response to moisture. On dry, windy days the pappus opens, catches the wind, and transports lightweight dandelion seeds far away from the parent plant.

Gravity dispersal, also known as “shattering” or “fruit drop” is the dispersal of a seed by falling. As the fruit reaches maturity, a natural process called abscission weakens supporting structures like stems and seed pods. This is what causes a ripe apple to fall from the tree. Abscission also causes fruit-containing structures to open and drop their seed on the ground.

A related dispersal method, called ballistic dispersal, uses forces generated by the plant itself, like mechanical tension or water pressure, to disperse seed. At maturity, the seed-containing structures act like a cannon or catapult, launching the seed far away from the parent plant.

Except for some aquatic plants, such as Mangroves, water dispersal rarely acts in isolation. For example, coconuts often use water for long-distance transport by floating through the ocean, but gravity dispersal is what first releases the coconut from the tree.

Wind-dispersed seed can also travel longer distances by landing in moving water. Some wind-dispersed species, like the cottonwood tree, produce moisture-sensitive seeds that must land in or near water for proper germination.

The seed is eaten and travels intact through the digestive tract. The animal then defecates or regurgitates the seed —hopefully, far from the parent plant. Edible fruits, like black elderberry (Sambucus nigra) have seeds that cannot be removed before eating (like raspberries). Their flavor, color, or aroma that attracts certain mammals and birds, which aid in seed dispersal.

Seeds are also dispersed by clinging to the hair, skin, fur, or feathers of various animals. For example, the hooked appendages of common burdock allow the entire seed head to be carried away by passing animals—a feature which served as the inspiration for velcro!

Human dispersal is responsible for the introduction of most invasive species. Humans migrating between continents intentionally carried their favorite ornamental and edible plants, some of which became invasive species in the new locations. Some seeds are unintentionally transported in grain shipments. Other seeds get stuck via soil to boots, tires, tools, and heavy equipment used in recreation – like hiking, or jobs like construction, excavation, and agriculture.

Awareness of seed dispersal mechanisms is the best way to prevent the spread or introduction of new invasive species. Based on this knowledge, phytosanitary laws have been enacted to prevent the transport of soil across borders. They also regulate seed contaminants in grain shipments, among other things.

However, not all spread can be prevented, and established plants can be difficult to remove. There are accumulated and dormant seeds that are in soil – referred to as the “soil seed bank.” Over time, this soil seed bank can be exhausted by spraying, removing, or bagging the plants before they disperse seed. Knowledge of dispersal methods can help scientists to develop more effective control options for invasive plants.

To read the entire blog, visit https://sustainable-secure-food-blog.com/2022/02/07/how-are-seeds-dispersed/. To view all of Crop Science Society of America’s Seed Week collection of blogs and stories, visit https://www.crops.org/seed-week.

Industry leaders optimistic for the future of U.S. cattle and beef industry

Workers’ compensation, beyond the numbers