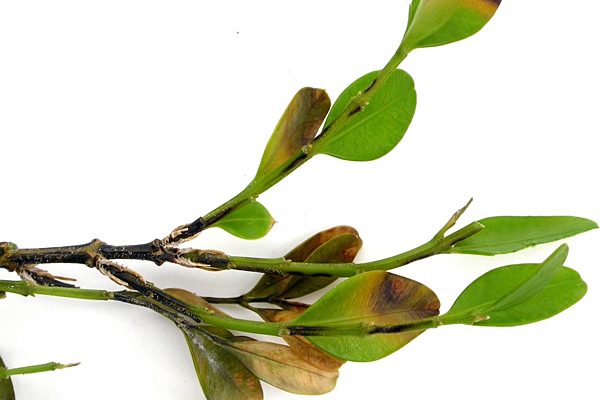 Since 2012, the industry has rallied behind a coalition of researchers dedicated to finding the best management strategies for this disease. (Horticultural Research Institute)

COLUMBUS, Ohio — A lot can change in five years, especially in terms of research. Back in 2012, the U.S. nursery production world was still reeling from the discovery of boxwood blight the year prior. The Horticultural Research Institute quickly established a fund dedicated to boxwood blight research and a boxwood blight working group composed of industry leaders and National Plant Board representatives. A best management practices document for nursery production was produced out of this collaboration.

Subsequent research is still in progress, but enough new information exists to warrant a revision of the best management practices released back in 2012. AmericanHort and HRI, in conjunction with the NPB, are pleased to announce that the revised, updated Boxwood Blight Best Management Practices, version 2.0, is now available online at HRIResearch.org.

Two closely related fungi, Calonectria pseudonaviculata and C. henricotiae, can cause boxwood blight. Currently only one, C. pseudonaviculata, has a known presence in the US. This is a good thing. Both, however, are present in the EU; so, the threat remains for C. henricotiae to come to the US. Despite being the same genus (Calonectria), these two species have some key differences, such as different responses to temperatures and fungicides.

While researchers know of only three host plants for boxwood blight, boxwood (Buxus), Pachysandra and sweet box (Sarcococca), the economic impact is potentially quite large, with over $20 million per year in U.S. retail sales. Impacts to landscapes are immeasurable. Boxwood blight has been confirmed in 24 states, with Illinois and Missouri being among the latest detections. There are a few states yet with significant boxwood production where the disease hasn’t been confirmed, such as Texas and Louisiana.

Since 2012, the industry has rallied behind a coalition of researchers dedicated to finding the best management strategies for this disease. Resources to support these research efforts have come from a few different sources, including directly from the industry through the Horticultural Research Institute’s grants program, the IR-4 Ornamental Horticulture Program administered by USDA-NFA, and from Farm Bill, Section 10007 monies administered by USDA-APHIS. Section 10007 has allocated nearly $3 million alone, all towards boxwood blight.

Early research focused on the basics of boxwood blight management, such as fungicide efficacy studies and cultivar resistance evaluations. Recent focus areas have included (but are not limited to) long distance spread of the disease, pathogen survival in soil, insect transmission, biological control agents, risk mapping and disease forecasting, temperature impacts on disease development and pathogen survival, impacts of mulch in landscapes on disease development, and the use of heat therapy in boxwood propagation.

“Boxwood blight risk is mounting for horticultural production facilities, especially those near an infested landscape site, now in 24 states,” said Dr. Chuan Hong, plant pathologist at Virginia Tech and the lead researcher of key boxwood blight projects. “This BMP update with the latest research from the Farm Bill projects was well timed and will serve individual growers and the horticulture industry as a whole very well.”

To access the latest version of the Boxwood BMPs, please visit the AmericanHort Knowledge Center. To contribute to the continued research of this disease, its impacts, and its solutions, please donate to the Horticultural Research Institute at HRIResearch.org/Donate.