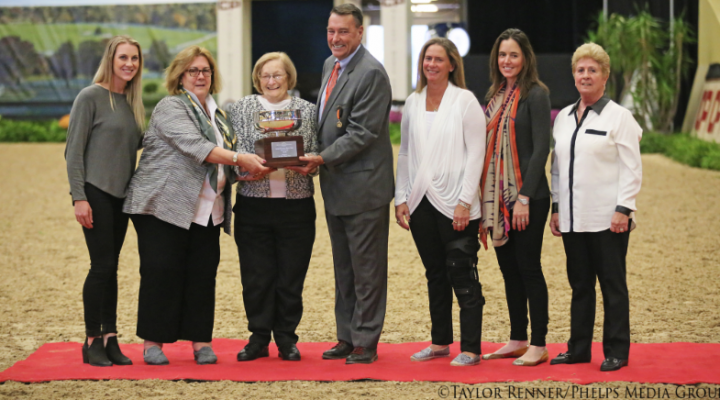 Helen Dent Lenahan received the Welles Family Award at the 2016 CP National Horse Show for being “a special individual who has made an exceptional commitment and contribution to the equestrian sport and industry.” (Taylor Renner/Phelps Media)

BUFFALO, N.Y. — Helen Dent Lenahan, a passionate, life-long horsewoman and philanthropist, passed away on May 19, 2017 at the age of 91. Lenahan was the dedicated horse owner of many successful performance horses, including several SBS Farms’ hunters and jumpers, after being a rider herself for many years prior.

Lenahan owned over 100 horses and ponies throughout her equestrian career, showing them herself or supporting the competitive aspirations of other riders. She was the recipient of several high honors in the equestrian industry, including induction into the National Show Hunter Hall of Fame in Old Salem in 2000.

She was given the Mrs. A.C. Randolph Owner’s Legacy Award from the United States Hunter Jumper Association in Lexington, Kentucky in 2011, and the Welles Family Award at the 2016 CP National Horse Show for being “a special individual who has made an exceptional commitment and contribution to the equestrian sport and industry.”

“I don’t know that there are many people who have been given those three honors in their lifetime,” Susie Schoellkopf, owner of SBS Farms, said. “Helen had an amazing background, and she was such a great horsewoman.”

Schoellkopf enjoyed a long and fruitful relationship with Lenahan, growing up with her daughter Susie and spending time riding and showing horses together over the years.

Earlier in her career, Lenahan enjoyed racking up ribbons aboard her three-gaited and five-gaited American Saddlebred horses at National Horse Shows — She also rode to great success in side-saddle classes along with her good friend Sharon O’Neill.

Together, Lenahan and O’Neill won high honors in the side-saddle division at prestigious venues such as the Washington International Horse Show and the National Horse Show. Most recently, Lenahan had taken up driving competitions with Welsh ponies in championships across North America.

“Helen was very smart,” Schoellkopf said. “She knew good horses, she knew what a nice hunter was and she was competitive.”

Lenahan’s niche for identifying and developing the finest show horses was indisputable. Several of her top horses, Logically, Roses are Red, and Gabriel, have been awarded United States Equestrian Federation National Horse of the Year titles.

Lenahan left a remarkable legacy on the equine industry, and most notably the hunter arena. She offered show opportunities to talented junior riders such as Molly Ashe Crawley, as well as numerous other professionals including Brian Flynn and Gary Raman — All who went on to win in the national arena with her horses. Among those professionals, Lenahan had a successful 25-year partnership with SBS Farms trainer and rider, Jennifer Alfano. Her guidance and presence at horse shows as an encouraging role model will forever be remembered by those she supported.

“Helen not only watched her own horses at the horse shows,” Schoellkopf said. “She always went back to watch the customers and the kids, regardless of if the horse was hers. She was very much a part of the barn and the team.”

Lenahan’s philanthropy was seen through her service as a board member of the Harry M. Dent Family Foundation, the Helen Dent Lenahan Foundation and the Buffalo Therapeutic Riding Center.

A dear friend to Schoellkopf and a proud supporter of the SBS Farms team and numerous other equestrians throughout the years, she will be dearly missed by all.
SBS Farms, Inc. continues the proud tradition of the Saddle and Bridle Club as one of the top show stables in the Northeast.  Susan Schoellkopf is also the executive director of the Buffalo Therapeutic Riding Center, which houses both the Buffalo Equestrian Center as well as SBS Farms, Inc. Built in 1922, the 160-stall facility is a historical landmark, with its unique English Tudor and Gothic-style architecture.

NYFB on end of 2017 legislative session