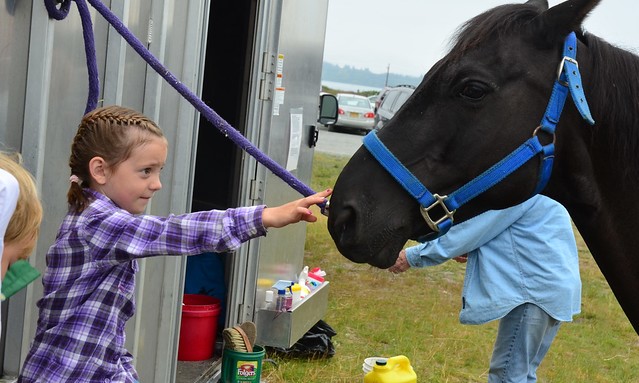 In 2018, nearly 1.1 million people attended one of the several hundred trade shows, meetings and other special events hosted on the grounds. (James Brooks, Flickr/Creative Commons)

SYRACUSE, N.Y. — The New York State Fairgrounds today kicks off a season of horse shows unlike any in its long history with 29 shows scheduled through early November. The Spring Premiere Horse Show in the Toyota Coliseum runs through Sunday, April 21.  It is the first event of the season, which will also include a first-ever visit from an intercollegiate national championship and six horse shows that will take place in the new Exposition Center.

“Equestrian events are an important part of our non-fair business and an important contributor to the economy of Central New York, as horse owners and families come from all over to spend time and money in the region. We wish all of this season’s competitors the best of luck and invite them to take advantage of the many wonderful places, attractions and restaurants Central New York has to offer,” said Troy Waffner, Fair Director.

The new show on the Fairgrounds this year is the Intercollegiate Horse Shows Association National Championships, which takes place May 2-5 in the Expo Center. More than 450 collegiate riders will compete in Hunt seat and Western riding disciplines. The athletes qualified for the championship event through regional competitions. Olympic gold medalist Beezie Madden, of Madison County, is a past winner of one of the top prizes, the USEF/Cacchione Cup, given to the highest-scoring Hunter Seat High Point Rider.

Many horse shows are free to attend. Check the Fairgrounds’ calendar of events for details on individual shows. Horse shows are a significant contributor to the Fairgrounds’ year-round business. In 2018, nearly 1.1 million people attended one of the several hundred trade shows, meetings and other special events hosted on the grounds. Over the last three years, and since Governor Cuomo’s $120 million revitalization of the 129-year old Fairgrounds, estimated attendance at events outside the 13-day Fair has doubled. The centerpiece of the plan was construction of the Expo Center, the largest clear-span special events building north of New York City between Boston and Cleveland.