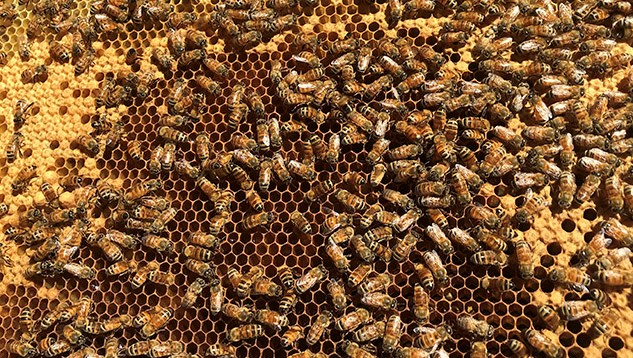 BELTSVILLE, Md. — When Agricultural Research Service (ARS) scientists played detective to identify an unknown invader that had set up a nursery in a honey bee colony, they solved a small mystery and expanded ideas about housing for solitary bees.

A state apiary inspector was stumped by the identity of insect cocoons that she had found inside the hexagonal cells of a beekeeper’s honey bee colony. So she turned to the ARS Bee Disease Diagnostic Service in Beltsville, Maryland for help. The cocoons were nothing she had ever seen inside a honey bee colony before.

“These two pieces of comb were sent to us because the regulatory authorities were concerned that this potentially could be the first find of a new problem for honey bees, a new attack agent,” explained entomologist Jay Evans, research leader of the ARS Bee Research Laboratory, which houses the diagnostic service.

The unusual cocoons were brown, about 3/8 inches long, and had a striking terminal cap with a hard black spot resembling a nipple. They were strongly attached to the cells with bee wax on both sides of the comb. The cocoons were wrapped in a thin layer of brown silky threads and they were hard to cut open and water-resistant.

After studying the cocoons in depth, the researchers were finally able to definitively identify the intruders as a type of solitary mason bee called the horned-face bee (Osmia cornifrons). It is native to northern Asia, including Japan, Korea, China, and Russia, and was introduced to the United States in the 1970s. They are more docile than honey bees and bumble bees.

Horned-face bees have never previously been reported cocooning in honey bee colonies. About 40 cocoons were found in the honey bee colony, which is more than one female bee can produce alone; therefore, this wasn’t the result of a single misguided bee invading a honey bee colony.

Now that horned-face bees are on the radar, beekeepers can be on the lookout for them, Evans pointed out.

“While these squatters turned out not to be a hazard to honey bees as far as we can tell, we always need to be alert and quickly gather solid scientific information about potential biological threats, before anyone makes disruptive and costly decisions,” he added.

This finding may also guide future research to support alternative shelter for crop pollinators beyond honey bees. Other mason bee species, such as the blue orchard bee (Osmia lignaria), are often used to pollinate tree fruit and berries. Currently, blue orchard bees and other native bee shelters are often supplied by home gardeners and crop producers in the form of nesting boxes, which are a grouping of tubules that structurally match what entomologists think mason bees like as housing.

“Finding these horned-face bees reproducing in the honey bee comb cells suggests the possibility that there are other shapes and materials than what is currently being used that could be explored as Osmia bee housing,” Evans said.

This research was published in the Journal of Apicultural Research.