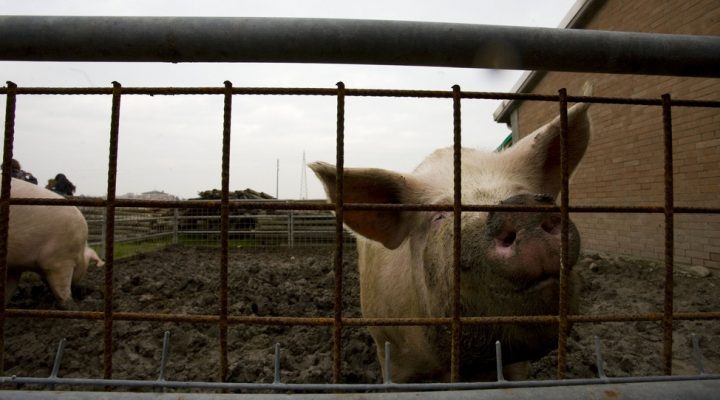 The company says it is investigating the facility owned by The Maschhoffs, one of the largest pork producers in the U.S. (Stock Image: Kelly Hau, Flickr/Creative Commons)

OKLAHOMA CITY — Hormel Foods Corp. said Tuesday it has stopped accepting hogs from a pork supplier in Oklahoma after an animal rights group released undercover video from a farm the supplier owns showing pigs in crowded pens and being hit with gas cans.

The company says it is investigating the facility owned by The Maschhoffs, one of the largest pork producers in the U.S.

“Animal stewardship, including the care and humane treatment of animals, is one of our most important values,” Austin, Minnesota-based Hormel said in a statement. The company said it would not tolerate violations of its strict policies on animal care and welfare.

The video was released by Mercy for Animals, which said the footage showed abuse. The video, which the animal rights group said was recorded in Hinton, Oklahoma, shows piglets in crowded pens and being hit with gas cans. It also shows male piglets being castrated — a common practice in hog farming. Mercy for Animals objected because it said the procedure was done without providing pain relief.

Footage also showed the use of gestation crates, which keep pregnant sows confined. Hormel had already pledged to do away with the metal enclosures at its own farms.

Gestation crates are too small to allow a pig to turn around. The pork industry began moving away from them following pressure from animal rights groups and a shift in sentiment among consumers.

Bradley Wolter, the president of Carlyle, Illinois-based Maschhoffs, said his company is also investigating and will re-train all its Oklahoma employees on proper production procedures. The company said it does not tolerate animal abuse.

“We have launched a full-scale investigation in response to this video,” Wolter said in a statement for the family-owned company. “Any animal care deficiencies discovered will be addressed in the quickest manner possible.”

It’s not the first time Hormel — a publicly traded company whose brands include Spam, Jennie-O Turkey Store and Wholly Guacamole — has been linked to an undercover video. In November 2015, Quality Pork Processors in Minnesota, which supplies Hormel, disciplined three employees. One was captured on video paddling pigs and two were shown horse playing with what appeared to be a blood clot or blood-soaked paper towel.