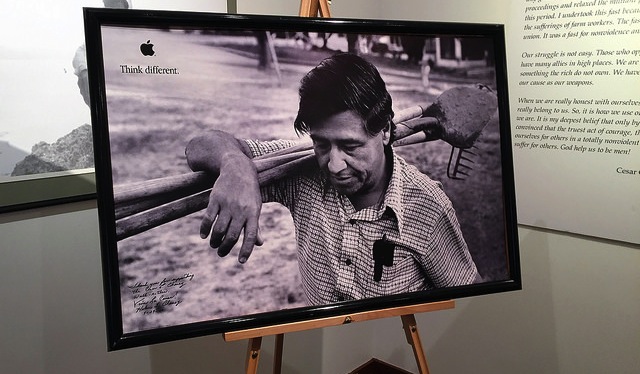 Through his commitment to nonviolence, Chavez brought dignity and respect to farm workers and became an inspiration to and a resource for individuals engaged in human rights campaigns throughout the world. (Ray Bouknight, Flickr/Creative Commons)

SANTA BARBARA, Calif. — At its regular meeting on Tuesday, March 21, the Santa Barbara County Board of Supervisors is expected to adopt a resolution honoring the accomplishments and legacy of Cesar Estrada Chavez. A national holiday in honor of Chavez is celebrated in California on his birthday, which is March 31.

Third District Supervisor Joan Hartmann and Fifth District Supervisor Steve Lavagnino will present the resolution to Cruz Phillips of the Santa Ynez Valley who spent 15 years as a community organizer in the farm worker movement, and continues to serve on the Board of Directors for the Dolores Huerta Foundation. The resolution will be read aloud in English and Spanish.

A short program and reception is planned featuring local Latino artists. Victor Valencia will perform an acoustic guitar rendition of “De Colores,” a traditional Mexican folk song well known throughout the Spanish-speaking world that also is associated with the farm workers movement. At the reception, paintings by Santa Maria resident Luis Ramirez will be on display. Born in Guadalajara, Mexico, Ramirez grew up in rural Santa Ynez. He studied at Guangzhou Academy of Fine Arts in China and California State University, Long Beach where he received his bachelor’s degree in Fine Arts in Drawing and Painting. His work is currently displayed in the exhibition “Remember Me” at the Elverhoj Museum in Solvang.

“We are honored to recognize the legacy of Cesar Chavez whose work for farm workers and civil rights was monumentally important,” said Board Chair and Third District Supervisor Joan Hartmann. “It is fitting that Cruz Phillips will be on hand to receive this resolution, as she has spent more than a decade as a community organizer continuing much of the work that Chavez championed.”

Through his commitment to nonviolence, Chavez brought dignity and respect to farm workers and became an inspiration to and a resource for individuals engaged in human rights campaigns throughout the world. Chavez died on April 23, 1993, of unspecified natural causes in San Luis, Ariz. He is buried at the National Chavez Center on the campus of the UFW headquarters in Kern County, Calif.

Volunteers in Los Angeles organized and led the effort in California establishing Cesar Chavez Day, the first legal state holiday and day of service and learning in honor of Chavez. A bill declaring a national holiday honoring Chavez was introduced by California Senator Richard Polanco and signed into law by Governor Gray Davis on August 18, 2000, marking the first time that a labor leader or Latino has been honored with a public legal holiday. The California legal holiday set in motion a wave of initiatives resulting in optional and commemorative Cesar Chavez Day in Arizona, Colorado, Illinois, Michigan, New Mexico, Texas, Utah, Wisconsin and Rhode Island.

The County’s resolution upholds the legacy of Cesar Chavez and continues his efforts to ensure equality, justice and dignity for all people. For information about Santa Barbara County government, go to www.CountyofSB.org.