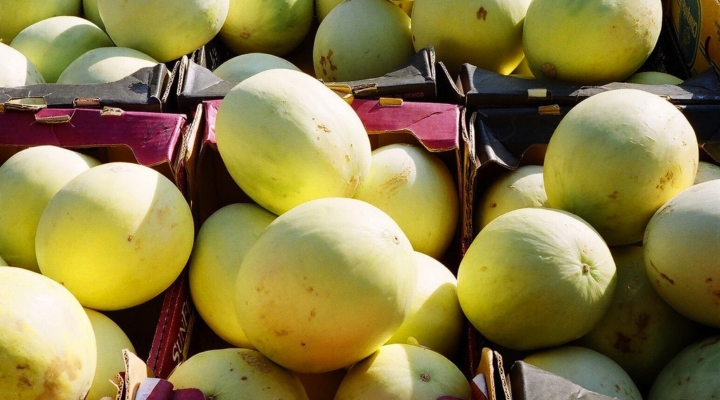 This season, Helle picked honeydews five times, compared to his average 2-3 times in prior seasons. Some of his honeydews even achieved Brix scores of 20. A Brix score of 14 is considered excellent for honeydews. A higher Brix score indicates better flavor and nutrient value.

“We grow a variety of fruits and vegetables, but this year, our honeydews stood out. When growing honeydew, you are shooting for high yield and high sugars. This year, neither were a problem,” said Helle. “Prior to applying H2OExcel, I was constantly watering to fight the dry conditions and a wilting plant. After applying H2OExcel, it became apparent that the plants were a lot healthier and the soil’s moisture retention had improved. Without a doubt, H2OExcel benefited us greatly this year. Our honeydews out-yielded and out-performed, all while staying super sweet. This was definitely a year for the record books.”

Helle said keeping his honeydews at the correct moisture was one of the biggest obstacles this season due to an abnormally hot growing season, coupled with low rainfall. To overcome the shortage of moisture, Helle used H2OExcel, applied through a drip irrigation system, to keep the moisture up and produce an overall healthier plant.

H2OExcel is a 100% biodegradable, proprietary blend of desert plant extracts; high-quality, humic acid-containing biologicals; and other all-natural, non-plant derived nutrient enhancers. Highly efficient, H2OExcel can change the polarity of water and soil to increase biological activity, interact with soil capillarity pressure and defend against dehydration of both the soil and plants by keeping water available deeper within the soil profile. H2OExcel also helps to increase available nutrients and balance the amount of water within the root zone of growing plants by supercharging biological activity.

Brookside Agra and its agronomy team worked with Helle on a soil management plan, which incorporated the use of H2OExcel.

“Green Gold Farms understands the importance of soil health and being progressive. Over the last couple of years, they have understood that nothing happens overnight and have adopted a systemic approach for managing water, building biology and managing inputs which leads to a balanced, healthier soil. H2OExcel was designed to bring all of these elements together. We are very excited for them and look forward to continued growth,” said Tony Arro, Brookside Agra Director of Sales – Specialty Products.

“In the 25 years I have been coming here talking to you guys telling you to buy stuff in season and when to buy it, I always tell you, ‘you can’t get a good honeydew until the end of August’. Well, you know, sometimes I’m wrong,” said Produce Pete on the segment. “This year, the Texas honeydews came out and the Brix is 15, 16 and as high as 20. These are the sweetest honeydews that you’ve ever eaten.”

For more information about H2OExcel, visit brookside-agra.com/h2Oexcel. For a personal, customized consultation on how this product can assist in increasing your bottom line dollars per acre contact Tony Arro, Brookside Agra Director of Sales – Specialty Products, at 618-628-8300 ext. 24 or tony.arro@brookside-agra.com.

Brookside Agra is a global fifth-generation, family-owned business based in O’Fallon, IL that manufactures and distributes a variety of research-proven, all-natural products for specialty feeds; animal health and production; agriculture; and commercial, industrial and environmental use. Brookside also offers agronomy services, which include crop nutrient recommendations, soil sampling, water and fertilizer analysis, and precision mapping, among other services. For more information about Brookside Agra and its products and services, visitwww.brookside-agra.com or contact Chad Vaninger, Executive Vice President and General Manager, at 618-628-8300 Ext. 23 or chadv@brookside-agra.com.