Home » Honey bees on the move 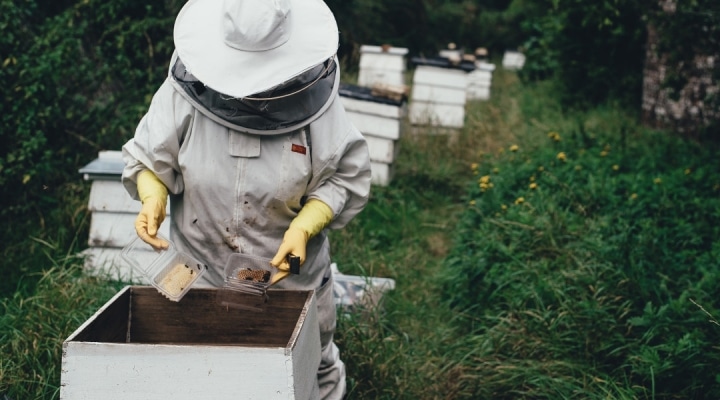 This new report quantifies the seasonal flow of hives around the country. (Photo by Annie Spratt on Unsplash)

WASHINGTON — The production of many fruits, nuts, and vegetables depends on pollination services provided by honey bees (Apis mellifera). In recent years, increased demand for these crops has resulted in growing production and rising demand for pollination services. To provide pollination services and produce honey, many beekeepers transport their colonies (also called hives) around the country during the year. Limited nationwide data exist on the number of honey bee colonies that reside in or pass through each State throughout the year, the routes these colonies take, and the distances colonies are transported. 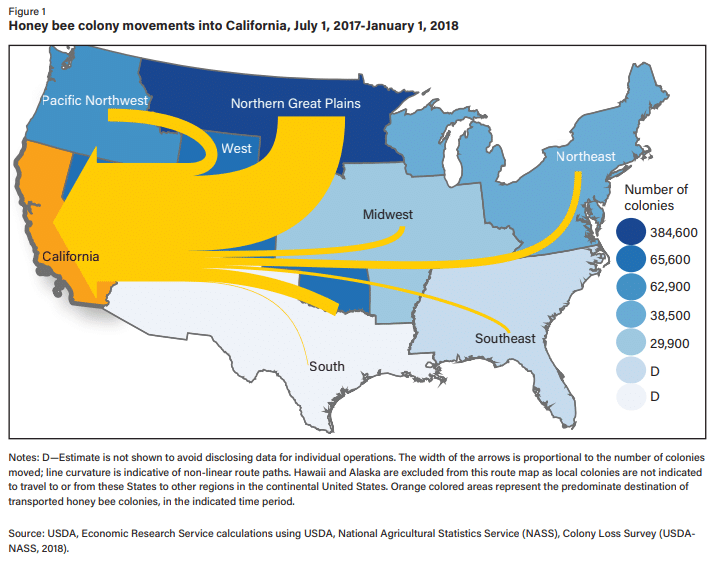 Honey bee colonies travel along seasonal routes across the United States. This travel is driven by the provision of pollination services (valued at roughly $250 million to more than $320 million annually); the search for forage to produce honey (valued at about $330 million annually); and the need to enhance colony survival and growth. These movements highlight the link between the production of pollinated nuts, fruits, vegetables, and seeds—especially in California—and access to the rich forage resources of the Northern Great Plains, including acreage enrolled in the Conservation Reserve Program (CRP).

From winter (January 1, 2017) to summer (July 1, 2017), beekeepers transported about 30 percent of all U.S. commercial honey bee colonies into the Northern Great Plains from other States. After summer and as the weather turns colder, most hives are moved out of the Northern Great Plains and into warmer States in the Southern United States, including California, to overwinter. During the survey period, about 5 percent of all hives in the United States overwinter in the Northern Plains.

• The intensity of pollination services used varies widely by crop, across regions, and even within the same crop family in different locations, helping to explain variations in seasonal colony transportation patterns.

• Almonds, the seventh most valuable crop in the United States at approximately $5.6 billion, represent the largest pollination service market for honey bees. California almond producers alone accounted for 80 percent of payments for pollination services during 2017.

• The declining availability of forage land that is highly suitable for honey bees contributes to the increasing cost of beekeeping. Rising beekeeping costs are at least partially passed on to pollination-dependent crop producers via increased pollination service fees.

• Long-distance transportation of colonies for pollination services and honey production is associated with increased colony stress and loss, as honey bees cannot forage during transport and may be subjected to excessive heat or cold, depending on the season. Transportation stress can be mitigated with enhanced management strategies.

When in use, the USDA, National Agricultural Statistics Service (NASS) Colony Loss Survey collected honey bee colony data quarterly, including the number of colonies located in each State at the start of each quarter. This data was used to construct colony movement across States between quarters. This study also uses information on payments for pollination services from NASS’ Cost of Pollination Survey, the value of honey production from NASS’ Bee and Honey Inquiry Survey, and data from the NASS 2017 Census of Agriculture. Statistics for 2017 are used for consistency between the Census of Agriculture and other NASS surveys.