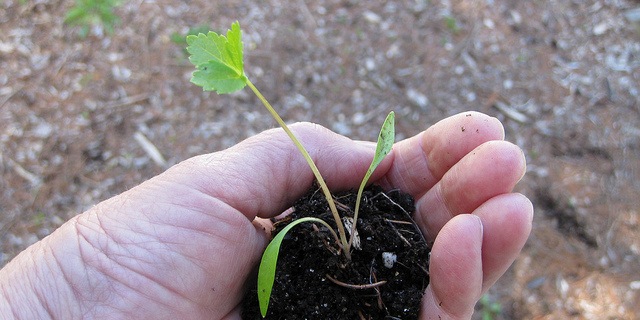 It's "a safe, beautiful place" for people "to come get their mojo back," said James Loomis, the farm manager. (Kate Ter Haar, Flickr/Creative Commons)

SALT LAKE CITY (AP) — An urban garden just two blocks away from Salt Lake City’s often violent and trash-filled homeless shelter has been thriving on a formerly blighted parcel of land thanks to homeless and formerly homeless women who are paid $9 an hour to work on it.

The Wasatch Community Gardens’ Green Team is flourishing with people who hadn’t worked in a decade, The Salt Lake Tribune reported (http://bit.ly/2wqnwLY ).

Camille Winnie, director of community services for The Downtown Alliance, came up with the garden idea after launching a cleaning program at The Road Home, the nearby shelter.

It’s “a safe, beautiful place” for people “to come get their mojo back,” said James Loomis, the farm manager.

Team members work a minimum of 20 hours per week and attend Friday classes on job skills. Each woman gets a 6-foot (1.8-meter) stretch to plant whatever she wants.

The Road Home makes an exception to its 30-day turnout policy and allows people working at the garden to stay for the full season.

The land is leased by Salt Lake City’s Redevelopment Agency at a cost of $1 per year. The produce is sold at a cut rate to the Head Start program for disadvantaged children.

Loomis is currently installing a greenhouse at the north end of the property, where the women will be able to learn hydroponics. He wants to add beehives next year and is hoping to get on-site housing for some workers.