Home » Holey leaves and vines! A look at houseplant trends for 2022 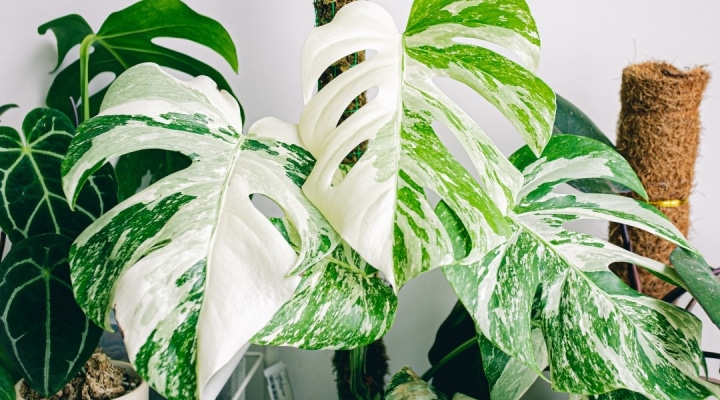 Steadily growing in popularity over the past few years, split-leaf philodendron (Monstera deliciosa) and Swiss cheese plant (Monstera adansonii) are showing no sign of retreat. (Photo by Huy Phan on Unsplash)

WASHINGTON — After the houseplant heyday of the 1970s, the penchant for potted green companions faded with all but the most dedicated plant parents. But over the past decade, as many young adults began filling their homes — and social media feeds — with indoor plants, a cross-generational audience started to take notice.

Then the pandemic hit, and the homebound turned to houseplants for a sense of comfort and a connection to nature. Two years in, the desire to green up our living spaces with “houseplant jungles” is still going strong.

But for everything, there is a season: Cactuses, the darlings of the past decade, are waning in popularity as bolder statement plants that impart a sense of hominess and warmth take their place.

As we begin a new year, a new crop of houseplant trends awaits. Here are the styles and plants you can expect to see more of in 2022.

Steadily growing in popularity over the past few years, split-leaf philodendron (Monstera deliciosa) and Swiss cheese plant (Monstera adansonii) are showing no sign of retreat.

“Looks are what make them popular,” said Puneet Sabharwal, CEO and co-founder of the Horti houseplant subscription service. Their leaves are uniquely fenestrated, which in the plant world describes foliage that is split or contains holes.

“Things also become popular when they’re hard to acquire,” Sabharwal said. In the past, “Monsteras were never available in tiny sizes – only with big, giant leaves – and they were expensive. So initially it was hobby gardeners taking clippings and sharing them with each other, then posting photos on Instagram.” The hashtag #MonsteraMonday helped fuel the frenzy, he said.

The plants are more accessible today, so the trend we’re seeing is a combination of their good looks, social media popularity and ease of care, Sabharwal said. “They’re hard to kill, and you only need one to add the feel of a jungle to your house.”

Climbing plants also are having a moment, as social media feeds fill with images of vines spilling from containers and snaking their way up stair railings and bookcases. Philodendrons, especially the velvet-leaved “micans” and variegated “pink princess” varieties, are desirable, as are large hoya and pothos plants. All are relatively low-maintenance.

“The beauty of vining plants is that you can easily take a clipping and make another,” Sabharwal said. “And they don’t take up a lot of floor space” because they grow vertically.

He attributes their surge in popularity to the wholesale-retail cycle: In 2020, lockdowns and business restrictions created a shortage of plants, so demand grew. Commercial growers responded to that demand by producing more. But, Sabharwal said, small pothos and philodendrons flooded the market and just sat on nursery shelves, growing bigger as the year progressed. Now there’s a large supply of plants with long vines, which are in greater demand.

Carnivorous plants can be tricky to grow, but who doesn’t love a good conversation piece?

“We’ve seen what we call a slow-motion explosion,” said Damon Collingsworth, co-owner of Sonoma County-based California Carnivores, the largest carnivorous plant nursery in the U.S. “When we opened in 1989, no one was interested because (the plants) were kind of weird, but weird is desirable now,” he said.

The recent fascination can be traced, at least partially, to TikTok videos showing the plants in action. One in particular, which shows a jumping spider occupying a pitcher plant, quickly amassed 15.8 million views after it was posted to the platform in September.

Stateside, Collingsworth said his nursery’s biggest sellers are Cape sundews (Drosera capensis) and butterworts (Pinguicula spp). Both are among the easiest carnivorous plants to grow indoors on a sunny windowsill. Tropical pitcher plants (Nepenthes spp) also are on-trend, but their care requires a balancing act that Collingsworth calls “water finesse.” Their soil should be kept moist but never soggy, and it should be allowed to dry only slightly between waterings.

All three are swamp plants, so they require mineral-free distilled or rain water and very little fertilizer because their nutrient intake comes from the insects they catch. In the absence of an abundance of gnats, fruit flies or other household pests, Collingsworth recommends adding one pellet of slow-release fertilizer to each pitcher plant’s “mouth,” or spraying the leaves of other plants with liquid fertilizer once a month.

“They’re so different from everything else and also really charismatic and beautiful,” he said.

“Japandi” style, a marriage of Japanese minimalism and Scandinavian functionality, is new to the home décor scene, and houseplants play an essential role in creating the aesthetic. The intentional placement of just a few statement plants in a room instantly imparts a sense of cozy elegance. Monsteras and the round-leaved Chinese money plants (Pilea peperomioides) provide the desired welcoming vibe without clutter.

Houseplant lovers bored by understated style are grouping large-leafed species for dramatic effect. Mature Monstera deliciosas, for instance, command attention with leaves that grow to 18 inches long, and the variegated foliage of golden and Hawaiian pothos varieties can reach 8 inches. The bold, arrow-shaped leaves of Alocasia, another rising star, often extend to 10 inches. Mix and match shapes and sizes for the biggest impact.

Before the pandemic, Collingsworth said, “we lived in a mass-produced, throw-away world. Now people are realizing nature is getting more and more scarce and special, and they’re appreciating that” by bringing more plants into their homes.