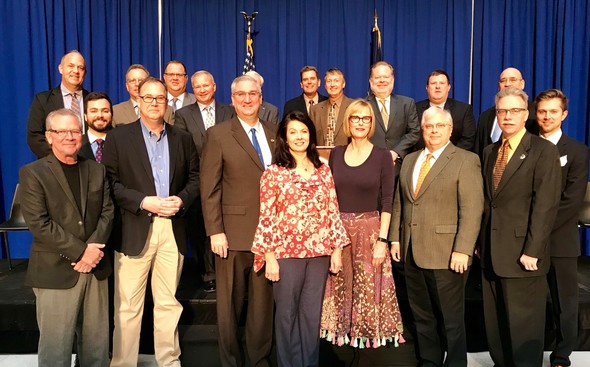 INDIANAPOLIS — Gov. Eric J. Holcomb and Lt. Gov. Suzanne Crouch recognized the generosity of Indiana’s poultry producers at the 70th Indiana State Poultry Association annual poultry donation. Over the past year, these producers have donated roughly 75 tons, or 150,000 pounds, of product to Hoosiers in need.

“I commend the association and poultry producers statewide for supporting Indiana’s economy and countless families across the state,” Gov. Holcomb said. “The donations they make every year provide thousands of highly nutritious meals to Hoosiers in need and are especially welcome during the holiday season.”

“As Secretary of Agriculture and Rural Development, it’s an honor to recognize our state’s poultry producers for their generosity, in a tradition dating back 70 years,” Lt. Gov. Crouch said. “Indiana’s poultry producers help feed the world and their spirit of caring is truly demonstrated through their product donations to help fellow Hoosiers.”

Today’s ceremony marks an annual tradition that dates back to the late 1940s. Organized by ISPA, one of the oldest poultry organizations in the nation, it was designed to recognize the strength of Indiana’s poultry industry, as well as the annual donations made by its members, who are responsible for over 95 percent of the chicken, duck, turkey and eggs produced in Indiana.

“Indiana’s poultry industry is made up of families, and many have been involved with raising poultry for multiple generations,” Brennan said. “Our producers enjoy sharing their thanksgiving by donating nutritious poultry and eggs with the Indiana community, and encourage others to do the same throughout the year.”

Brennan added that more than 600,000 eggs were donated to families this year alone, which he attributed to the generosity of Indiana’s poultry producers as well as the strength of the industry.

According to USDA’s National Agricultural Statistics Service, Indiana nationally ranks No. 1 in duck production, No. 2 in egg layers inventory and total eggs produced, and No. 4 in turkeys raised. The industry contributes more than $4.25 billion annually to Indiana’s economy and accounts for more than 7,000 jobs.