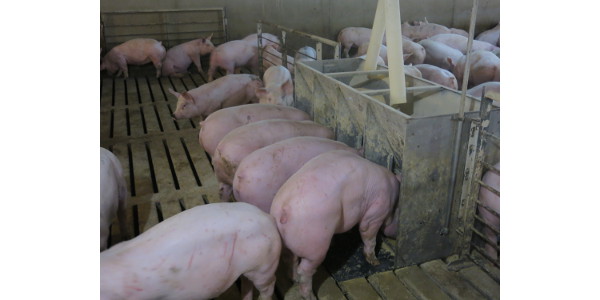 The USDA’s March Hogs and Pigs report places the March 1 inventory of all hogs and pigs at 74.8 million head, down about 3% from last quarter and 1.8% from last March, compared to pre-report estimates of 0.1% higher. (National Pork Board)

URBANA, Ill. — The USDA’s March Hogs and Pigs report places the March 1 inventory of all hogs and pigs at 74.8 million head, down about 3% from last quarter and 1.8% from last March, compared to pre-report estimates of 0.1% higher. The report estimates are mostly around or below the lower end of the range of pre-report expectations and represent the first March-over-March reduction since 2014, according to Jason Franken, agricultural economist at Western Illinois University and contributor to the University of Illinois farmdoc team.

“The market hog inventory is about 1.8% smaller than a year ago, and below the anticipated range. The breeding herd is 2.5% lower than a year ago and at the lower end of the pre-report estimate,” Franken says.

Each class of market hog inventories is down compared to the same time last year. The heaviest two weight classes of 120-to-179-pounds and over-180-pounds are both 2.5% lower than last March and also 3% and 1.3% lower than pre-report expectations, respectively, while the 50-to-119-pound class and under-50-pound class are 1.6% and 1.9% lower than expected.

“Hence, it appears that market-ready supply especially is smaller than anticipated. Overall, the number of hogs weighing less than 180 pounds is nearly 1.6% smaller than a year ago, and these will be the market hogs arriving at processing plants from April to August 2021,” Franken explains.

The decline in lighter-weight hogs partly reflects that the December-February pig crop is 1.4% smaller than last year with around 1% fewer sows farrowed. This is bullish news compared to expectations of 0.7% and 0.5% higher, respectively, with an average of 10.04 pigs saved per litter; that is about 0.5% lower than the 11 pigs per litter for the same period last year, Franken states.

“On a monthly basis, pigs saved per litter has often been lower than the prior year for a while now, particularly in December and January, contributing to tighter supplies,” he says. “Meanwhile, spring and summer farrowing intentions are down 2.5% and 4.2% from actual farrowings last year compared to expectations of 0.8% lower for each. These numbers should similarly imply somewhat smaller slaughter numbers in subsequent periods.”

The U.S. exported 606 million pounds of pork in January, or about 9% less than in January of 2020. While this decrease mostly reflects lower shipments to China and Hong Kong, exports to Mexico were also about 6% lower. U.S. pork exports to other Asian and Latin American countries are up for the start of 2021.

“Still, the USDA estimates total U.S. pork exports for the first quarter of 2021 to be 1.825 billion pounds, or about 10% below last year, again mostly due to anticipation of reduced shipments to China and Hong Kong,” Franken says.

“Second- and third-quarter U.S. pork exports are anticipated to be about 1.4% lower and higher than the prior year, respectively, with fourth-quarter exports rising nearly 5% over the prior year to about 1.95 billion pounds. Hence, while export demand is somewhat sluggish to start 2021, it should grow in the latter part of the year,” he adds.

Taking all of this into account, there is the possibility of profitable hog prices in 2021 if feed costs don’t rise too high, Franken states.

“The forecast presented here is for the national weighted average net price on a carcass basis for all transactions for producer-sold barrows and gilts, including negotiated and contract prices,” he says.

“This net price should be more reflective of what producers receive, on average, and normally runs at a premium of more than $2/cwt over the base price on average. From December to February, this net price averaged $69.75/cwt compared to $57.80/cwt for the corresponding net prices for negotiated or spot transactions.”

In general, hog prices tend to be higher in the second and third quarter, with lower prices in the first and fourth quarters, Franken explains. Consistent with that pattern, this forecast places second-quarter prices at about $78.80/cwt, rising to $80.08/cwt by the third quarter and dropping to $70.33/cwt for the fourth quarter of 2021 and $68.45/cwt for the first quarter of 2022, respectively.

“These projections are consistent with the strong demand and short supply observed currently, the effects of which may weaken somewhat later in the period if producers start to ramp up production. If hog supply turns out to be greater than anticipated or if demand falters, then lower prices may be realized,” Franken concludes.