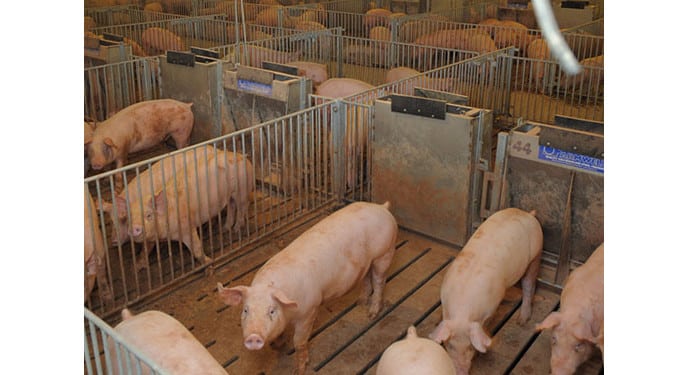 Compared to the five-year average for the same week, last week’s hog price was about $25 or 35% higher than the typical level. From the same week last year, prices are down about $7 or 7%. (K-State Department of Animal Sciences)

LAKEWOOD, Colo. — Hog prices have been generally moving sideways for several weeks now. In mid-February, hog prices (national weighted average base carcass) were $92.75 per cwt and since that point weekly prices have averaged about $98 with the high for the year so far being $99.99 the last week of April. Last week prices finally crested the $100 per cwt mark with a weekly average price that will likely be over $101.

Compared to the five-year average for the same week, last week’s hog price was about $25 or 35% higher than the typical level. From the same week last year, prices are down about $7 or 7%.

The pork cutout value reached its highest value so far for the year in February at $111.08 per cwt. Since that peak the cutout value has averaged about $106 per cwt. Since late-March the pork cutout value has been tracking below 2021 levels and for the last three weeks the cutout has been 12% or about $14 per cwt below last year. Although the cutout has been below the prior year’s levels for several weeks, compared to the five-year average the cutout is still about 16% or $14 higher than typical levels. The loin and butt primal values have been around $1.00-$1.10 per pound, which is at or slightly above typical levels for this time of year. Both the picnic and hams have risen in recent weeks to around $0.65 and $0.85 per pound, respectively, which is just below the prior year. Ribs have been on a seasonal rally with last week near $2.00 per pound while the belly value has been under some pressure with recent weeks around $1.50.

Modest concern has developed as hog and pork prices are down from a year ago. Post-COVID spending was unprecedented and led to a substantial rise in hog and pork prices last year. The difficulty has been determining if consumer spending at the retail level was sustainable and to some degree this is still playing out. Inflationary pressures and record pork prices have started to effect consumer spending with many starting to reevaluate purchases and possibly back away from higher priced meats. Compared to typical levels, the pork cutout and pork primal values indicate pork demand is still robust.