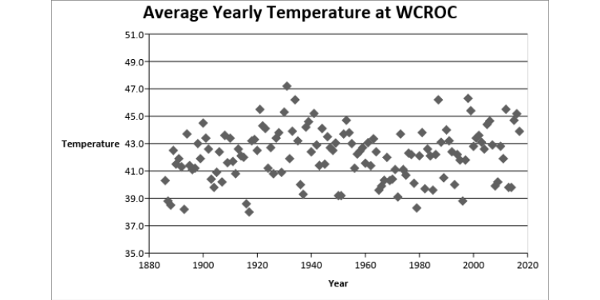 MORRIS, Minn. — Weather affects our daily lives, from planning our day-to-day activities to planting our fields or gardens to deciding how to dress. We rely on the weather forecasts to make our plans, but often take for granted the process of collecting this important information.

Weather data at the West Central Research and Outreach Center (WCROC), Morris, is one of oldest weather data sets in the Western Plains. Our weather station was established on April 15, 1885 by the Army Signal Corps. The station was located near 400 East 4th Street, and readings were made by D. T. Wheaton. On October 4, 1919, the station instruments were moved to the West Central Ag Experiment Station, which was located on the UMM campus. The weather instruments were later moved to the experimental plot area at the WCROC on September 1, 1973, where they currently reside.

Along with the longevity of our weather records, we’ve maintained them at a completion rate of 96%. This is one of the highest competition rates of weather records in North America. When considering how this was accomplished, one cannot help to think about the dedication of the staff collecting the data over the last 133 years. Much of this data is collected manually. Rain and snow fall, frost depth, and the evaporation pan is still taken manually. It was not until 1983 that we had automated temperature recording equipment. To put this in perspective, since April 15, 1885, someone has walked out or traveled to the weather station every day and collected data on temperature, rain and snow fall and other measurements 96% of the time. The data was faithfully collected in blizzards, freezing temperatures and during other hardships, such as the Spanish flu epidemic that occurred in 1918.

WCROC staff write a monthly report of the weather data collected, which is published in the Stevens County Times newspaper. We usually do not talk of trends and look at the weather from a historical perspective in the monthly report. However, our annual weather report allows us to look closer at how the weather is changing here in Morris, and how it may affect crop development and yields. (View our annual weather reports at https://wcroc.cfans.umn.edu/weather/weather-history)

In the last three years, we have had above average temperatures followed by two years of below average with typical variability.

We are also seeing less days over 90o F. Figure 3 shows the historic distribution of days over 90o F. The upper limit of growing degree days is 86oF; when temperatures are over 90°, crops are stressed. It would appear we are having fewer days over 90o F in the last twenty years. However, that is not to say we could not get a repeat of a hot drought year like 1988.

Another interesting trend we see is reduced evaporation pan measurements. Data is collected by measuring the evaporation occurring weekly in a round 48 inch pan. Data for this measurement goes back to 1971. There has been a considerable change in the trend over the past years. Figure 5 illustrates the data. What we see is that we have almost 1/2 the evaporation we had in the early 1970s. This trend has been noted worldwide and the cause is still debated.

There are several ways how this data can be applied to agriculture. It was most likely easier to put up dry hay in the 1970s vs the last ten years. Diseases that are favored by a wet canopy such as white mold in soybeans have better conditions to live in. This may be important for many small grain diseases also. However, this data may reflect less water loss to crops or the potential of reduced moisture stress in recent years. Water is often one of the most important limiting factors in non-irrigated crop production. More discussion and research is needed to understand the impact of this observation.

In conclusion, the weather records at WCROC show changing weather patterns. However, this is expected as we look back at in our weather history. While our extensive weather records are just one of many important weather observation sites in the country, the data can be useful to area farmers, homeowners, and weather observers. For more weather related data taken at the WCROC, visit https://wcroc.cfans.umn.edu/weather.