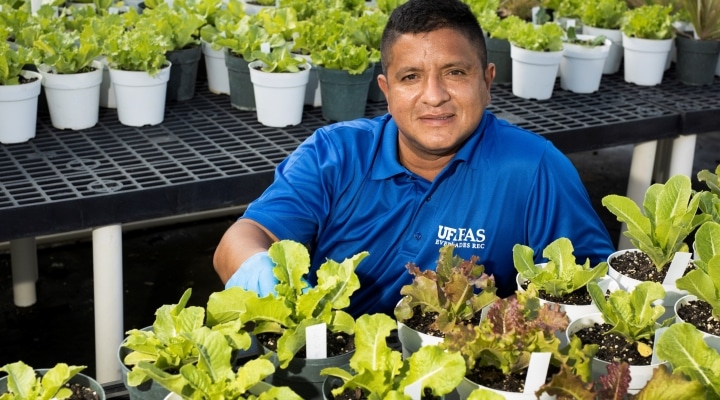 For Germán Sandoya Miranda, a lifelong passion for agriculture began when he was a child playing on his grandparents’ farms in his homeland of coastal Ecuador

GAINESVILLE, Fla. — For Germán Sandoya Miranda, a lifelong passion for agriculture began when he was a child playing on his grandparents’ farms in his homeland of coastal Ecuador

Today, he is an assistant professor of plant breeding and genetics for the University of Florida Institute of Food and Agricultural Sciences (UF/IFAS) where the bulk of his work is improving new lettuce varieties that can beat the heat of Florida’s subtropical climate and withstand pests and diseases. He has authored more than 100 peer-reviewed articles

Stationed at UF/IFAS Everglades Research and Education Center in Belle Glade, Sandoya Miranda is a statewide extension specialist in leafy vegetables and leads a lettuce breeding program that has gained international attention and national funding.

Sandoya Miranda offers us a glimpse at some of his work and reflects on Hispanic Heritage Month.

“I am among five children with four sisters. Being the only guy means that I grew up with a lot of sister and mother love all the time,” he said.

“I had the happiest childhood, as my grandparents from both sides of the family lived in rural areas. During weekends, we would visit as a family. I was able to go to the rivers and estuaries for some fun times. I ate fresh tropical fruits and played with chickens and other farm animals. Family was very important where I grew up. I spent significant time with all relatives in celebrations, important dates and long meals.”

“I wanted to study agriculture my whole life because I grew up in that environment. I knew you could do more in agriculture as I got older. I just didn’t know exactly what that could be. So, early enough I did an internship in a research institution investigating maize breeding and learned that crossing one maize with another maize made a better maize in many different aspects. That caught my curiosity for agriculture even more. It was at that time that I decided to pursue graduate school.”

Breeding a sustainable kitchen staple
Lettuce is harvested on more than 342,965 acres across the nation, and represents a $2 billion industry mostly situated in California, Arizona, and Florida, according to the 2017 U. S. Department of Agriculture (USDA) Census Data.

The goal of the lettuce breeding program is to develop varieties that will thrive in Florida’s soil and subtropical climate, and varieties that resist pests and diseases, Sandoya Miranda explained.

“I feel that any of the breeding projects I work on will have benefits to growers and consumers today and in the future. As plant breeders and scientists, we are always thinking forward. We look at the issues that producers will face with a crop, and what consumers will want in the future. Improving lettuce or any crop is paramount for human survival. In the future, there will be more people on this planet, and we have to provide varieties that will adapt to the climatic changes, whichever those might be. We will have less places to produce crops and these crops will have to be efficient and more nutritious,” he said.

The value of mentorship and a message to future students
To work as a professor is to be able to mentor others in science and train the scientists of the future, Sandoya Miranda said.

He has this advice for students:

“First, feel the passion for science before enrolling in a scientific program. If you are curious about a career path in horticultural science and need some advice, don’t hesitate to talk to someone doing this type of work. This is probably the best strategy to understanding all the areas of science, what we do in science and how we try to improve human life with science even in the most minimal of findings. ‘Let’s make history is what I tell our high school or undergraduate students when they join our lab team. Believe it or not, we are making history by the minute.”

Celebrating Hispanic heritage
“What I value most about Hispanic heritage is family values and the variety of Hispanic food from the many Hispanic countries. Hispanics are probably the most diverse population on this planet, and the diversity in people and ethnic backgrounds are important to me,” Sandoya Miranda said.

“I celebrate the month by attending events that celebrate our heritage when possible and reading stories about the Hispanic population and accomplishments.”