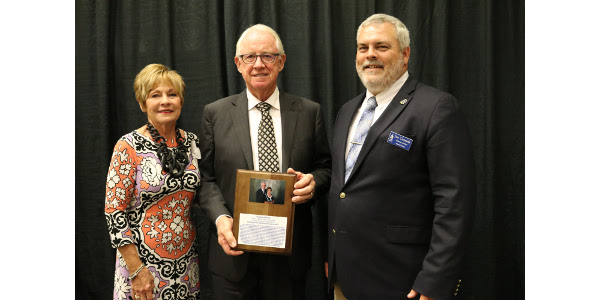 The SDSU Distinguished Department of Animal Science Alumni Award recognizes the accomplishments of alumni who have impacted the agricultural industry, communities and individuals across the state, nation and world. Contributions of Distinguished Alumni would include outstanding professional accomplishment, sustained service to agriculture, and/or distinguished leadership.

“The Department of Animal Science is proud to recognize Mr. Hillman with this award for his contributions to the beef cattle industry,” says Joe Cassady, SDSU Animal Science Department Head. “Howard Hillman first distinguished himself as a member of the 1962 SDSU National Champion Livestock Judging Team and went on to even greater success as a producer of superior Angus genetics.”

Hillman received his Bachelor of Science degree in Animal Science from SDSU in 1963. While at SDSU, he was active in several organizations, including the livestock judging team that won the national championship in 1962. After graduation, Hillman returned as a managing partner to the diversified family farming and ranching operation, BonView Farms, near Canova, SD.

From the time of his return through the farm’s dispersal in 1999, the BonView name became synonymous with high-quality, production-oriented Angus Cattle. Hillman maintained a world-renowned seedstock operation, producing Angus genetics for decades that have influenced the international value of Angus cattle. Numerous BonView-produced sires have headlined AIs studs, including sires that historically rank in the top high-usage bulls of all time in the breed. These bloodlines continue to genetically impact leading registered herds and commercial cattle programs.

BonView Farms was an early adopter and advocate for the use of performance data to characterize Angus genetics. Hillman’s focus on the improvement of economically relevant traits positively impacted the profit potential of his commercial bull customers.

When BonView Farms was in production, Hillman and his family graciously hosted tours and practice sessions for the SDSU Livestock Judging Team. “The quality of the cattle was top-notch and Howard, along with his wife, JoAnne, were always extremely accommodating to the teams, even providing steak dinners to them,” Cassady relates. The Hillmans remain loyal Jackrabbit supporters.

Hillman has judged most major livestock shows throughout the U.S. BonView Farms showed many champion Angus cattle throughout the country including at the Chicago International and Denver National Western Stock Show. They have offered genetic advancements to the Angus breed through annual production sales.

Active not only as a producer, Hillman was also a volunteer and leader in the American Angus Association and the Angus Foundation, serving as President and on the Board of Directors for Certified Angus Beef. One of the many leadership roles that he accepted was chairman of the Leadership Cabinet for the “Vision of Value,” the Angus Association’s first capital campaign launched in 2006. He led a fundraising effort with a goal of $11 million in donations for the Angus Foundation. Because of these and other efforts, Howard has been inducted into the Angus Heritage Foundation.

Howard and JoAnne continue to champion the need for youth leadership and have funded scholarships with the American Angus Association and at SDSU to continue this charge.