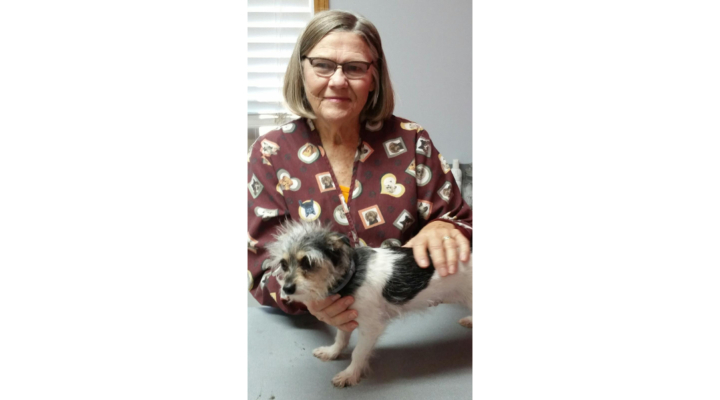 Dr. Kay Helms is being recognized as a Significant Woman in Oklahoma Agriculture. As a long-time veterinarian she has and continues to care for animals of her own as well as those of others. (Courtesy Photo)

COALGATE, Okla. — Take the business card of Dr. Kay Helms and flip it over to the back.

Several years ago, Helms, who lives near Coalgate in southeastern Oklahoma, adopted and adapted a saying from John Wesley for her New Year’s resolution.

She has and continues to live by those words written on the back of her card.

Actually, that’s been a lifelong blueprint.

Go back to the 8-year-old girl who would go out to the barn in the eastern South Dakota community of Cavour and sing to the cows.

She loved animals from early on.

A lot of people, especially in southeastern Oklahoma, know that little girl because of what she went on to do. She went on to graduate from Oklahoma State University and become a veterinarian at the Winsor Animal Clinic in Coalgate.  She went on to build a ranch along with husband Phillip where they continue to run a cow-calf operation, just a half-mile south of where Phillip grew up. That little girl also went on to be Director of the Veterinary Technology Program at Murray State College in Tishomingo, retiring from there in 1999. She then did relief work for veterinarians who needed extra help for one reason or another. Today she works for Dr. Larry Thompson doing the spays and neuters at Winsor Animal Clinic, the business where she started. Helms also provides that service for some local humane organizations.

However, to truly appreciate the adult Kay Helms, it’s important to understand the child who loved animals.

What they did have

Helms’ parents rented farmland in Beadle County, S.D., and paid the landlord with a portion of the crops.

“I guess you could say we were sharecroppers, but we never used that term,” she said.

They didn’t have electricity or running water in the house until Helms was 10 years old; no telephone until she was a freshman in high school and no inside toilet until her senior year.

What they did have were animals: chickens, geese, ducks, hogs, milk cows and a few beef cows.

“When I was about 6, I was able to fight off the Australorp rooster and the gander, so I started gathering eggs and feeding chickens,” she said. “At 10 I was milking cows. We hand-milked 12 to 18 cows year-round. Our grocery money was earned by selling eggs and cream every Saturday. If we had a good week and there was any extra change, we might get an ice cream cone on thoseSaturday trips to town.”

While she doesn’t remember playing with dolls much, Helms always had a cat.

“I would dress them and feed them bottles, and thought I was training them,” she said. “I had one cat that curled itself around my neck while I sat and milked the cow.”

Safely said, animals even played a significant role in Helms meeting her husband, Phillip. She was working at the Winsor clinic at the time.

“He had some cattle and a bird dog which I saw from time to time,” Helms said. “He and his friend would come sometimes in the evening and help us work calves.”

Phillip and Kay married in December 1979.

“We have been ranching and building our ranch since we were married,” she said.

Again, they are primarily a cow-calf operation with about “200 mamma cows.”

“Some years we hold the calves over planting wheat or rye grass pasture to graze so as to sell them as yearlings,” she said. “We raise our own replacement heifers and buy good bulls, thus always improving the herd as a whole.”

Development has been a driving force for so much of what Helms has and hopes to accomplish.

Take for example the students she got to work with while serving as Director of the Veterinary Technology Program at Murray State College.

“Hands down the greatest accomplishment was helping to develop young people into responsible, gainfully employed citizens,” said Helms, who is now serving her second term on the Board of Regents for Murray State College.  “I believe you can measure your success as an educator by the success of your students. That being the case, I consider myself very successful, as testified to by the current chairpersons of the program who have moved it far beyond what I ever could have.”

While helping students was fulfilling, most everything works its way back to animals for Helms.

Not too long after retiring, she started offering low cost spay and neuter clinics for low income families, working for local humane organizations in Coalgate, Broken Bow, Fort Towson and Ada. She does about 2,000 surgeries a year.

“I can tell you it makes a difference to the families and the animals I service,” she said. “I serve as adviser to these organizations, but am not on their boards. One program the Broken Bow and Coalgate people do is transporting dogs to other states. These animals are now living in adoptive homes all the way from New York to Hawaii. My surgeries are low cost, but if necessary no cost.”

In addition to these other efforts, Helms does a trap, neuter and return for the feral cats in Coalgate.

Helms briefly considered medical school, but the compassion for animals within her was too powerful.

Outwardly, some people didn’t see it. Her father asked her more than once why she didn’t become a physician; that is until he saw the answer one frigid night.

“He came around when he went on a farm call with me,” she said. “He watched as I did a C-section in the pasture under pickup lights in a sleet storm.”

The evolution of water-use efficient crops