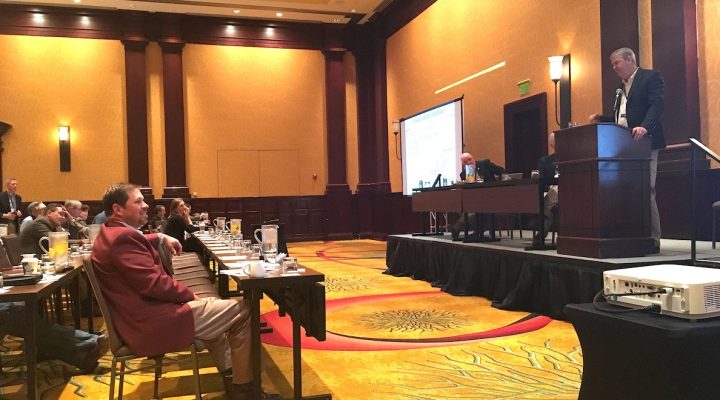 FORT WORTH, Texas — With record corn production and higher yields in other major commodities, a low-price environment is here to stay with little catalyst to spark a rally, according to projections by agricultural economists.

Dr. Joe Outlaw, co-director of the Agricultural and Food Policy Center at Texas A&M University in College Station, and Dr. Pat Westhoff, director of the Food and Policy Research Institute at the University of Missouri, recently gave farm and agricultural economic forecasts at the Southwest Ag Issues Summit in Fort Worth.

Forecasts for major crops this next growing season indicate another year of low prices as farmers must hope for above-average yields that give them a chance to break even. For example, in 2016 West Texas cotton growers benefited from a high-yielding cotton crop that reduced their cost per pound down to where cotton prices were allowing them to break even, Outlaw said.

“For those in West Texas, the good fortune was having a big cotton crop that muted the low prices,” Outlaw said. “Nobody saw this large and sustained drop in commodity prices coming (when the current farm program was written in 2014).”

Outlaw said if there had not been high yields in cotton, particularly for West Texas farmers, the overall financial situation for those farmers would be much worse because most cotton farmers had incurred losses each of the previous two years. Overall, there’s little hope for a rally in commodity prices, he said.

“It would take something big to sustain higher prices,” Outlaw said.

Without a yield loss, Agricultural Risk Coverage payments will not provide much assistance.

“Price Loss Coverage is providing a safety net and, based on current price forecasts, that’s not going to stop for most crops,” he said.

Outlaw also urged caution with regard to trade.

“If trade issues become a major concern, commodity prices could get even worse,” he said.

Westhoff said gross domestic product in the U.S. has been 2 percent since the recession. China’s growth rate has been 6 percent each year, but is slowing. And interest rate projections for the U.S. are 3 percent by 2020.

Looking back, Westhoff said there has been a 48 percent increase in global corn, wheat, rice and soybean production since 2002. These increases can be attributed to good weather and improved technology.

For the 2017-2018 crop year, economists provided prices and planted acre projections from his December 2016 Food and Policy Research Institute Baseline. Corn prices are predicted to be at marketing year average price of $3.62 a bushel for 2017-2018  with 15.58 million bushels harvested compared to $3.61 a bushel and 13.6 million bushels during the 2015-2016 crop year.

Cattle prices are projected to remain level through 2020 with more beef supplies in the U.S.

Both Westhoff and Outlaw told summit attendees they did not like painting a dim picture on the farm economy, but most farmer’s costs of production are above current prices and the farm program safety nets will provide some assistance but not make up for the large decline in market receipts.