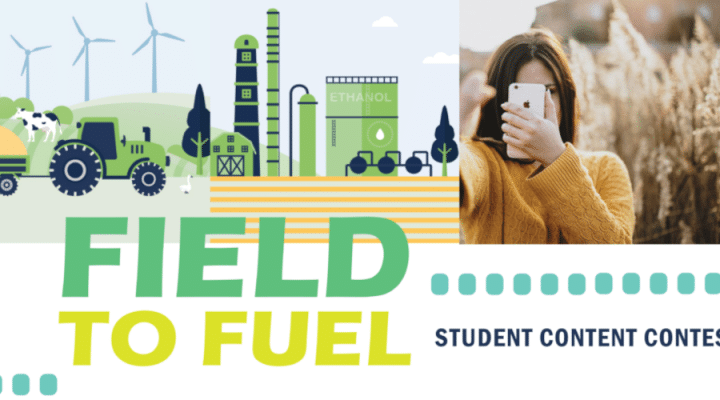 LINCOLN, Neb. — Have you ever switched on a light? Have you used a laptop or a smartphone? Have you ridden in a car or a bus? If you answered “yes” to any of these questions, you have used energy. As technology develops and the world’s population grows, people need more and more energy. But meeting this need sustainably can be a challenge!

Nebraska high school students took on the mission of educating their peers about reducing their energy use and carbon footprint through the Field to Fuel student social media contest. Students were tasked with planning a one-week social media campaign to promote Renewable Fuels Month – a celebration recognized in May by Nebraskans and sponsored by Nebraska Ethanol, Nebraska Corn, Nebraska Soybean, and Renewable Fuels Nebraska.

Aditi Rai, a junior at Elkhorn South High School, received first place honor this year for her social media content, which will be featured on the Nebraska Ethanol Board’s social media throughout Renewable Fuels Month. Rai also received $1,000 from the Nebraska Ethanol Board, which she plans to donate to her school’s Unified Green Team – a club dedicated to recycling and taking care of the community.

Renewable Fuels Month recognizes the importance of renewable biofuels, such as ethanol and biodiesel. The month of May typically kicks off the summer driving season, making it a great time to fuel up on biofuels to help reduce greenhouse gas emissions and save money.

Vehicles 2001 and newer can safely use blends of ethanol up to E15 and will often see a $.10 savings per gallon. Owners of flex fuel vehicles can use blends up to E85 and experience even greater savings. Find ethanol locations near you at fueledbynebraska.com. Heavy-duty vehicles can lower emissions by filling up with biodiesel blends up to B20. Locations can be found at biodieselne.com.

“We’re really excited about Renewable Fuels Month as we work to share the benefits of biofuels with our state and its people,” said Tony Leiding, president of Renewable Fuels Nebraska. “I encourage everyone to help us celebrate, spread the word, and continue to use higher ethanol blends throughout the summer driving season.”

“We appreciate all the creative submissions we received for our annual contest and hope the students had fun while they learned,” said Jessica Sodeke, program manager for the Nebraska Ethanol Board. “Students are the future of renewable fuels, which are vital to Nebraska’s economy and our environment. We hope to see more entries next year and would encourage teachers to devote part of their curriculum to highlighting ethanol and other renewable fuels.”

If educators would like more information about how to celebrate Renewable Fuels Month with your students or to introduce biofuels into your curriculum, please visit Ethanol in the Classroom under the Educational Resources tab at ethanol.nebraska.gov, or give the Nebraska Ethanol Board a call at 402-471-2941.

The 2023 Field to Fuel contest will kick off in early fall and is open to all high school students grades 9-12. Students do not have to be in FFA to enter; any students can enter, including those interested in agriculture, renewable fuels, supporting a cleaner environment, and/or film production. For more information about the contest, visit https://ethanol.nebraska.gov/ag-in-the-classroom/fieldtofuel/.