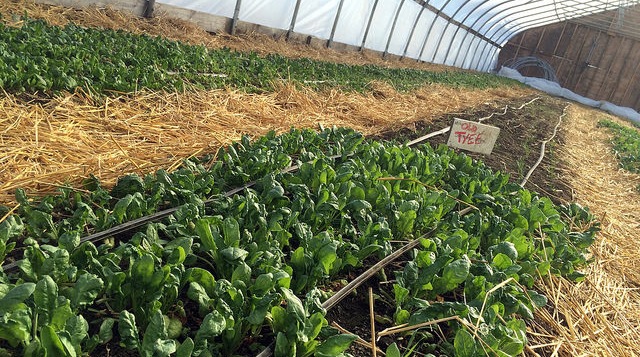 While crusty snow and ice covers the ground in January in Vermont, spinach leaves sprout in rows of unfrozen soil inside a high tunnel. (Sterling College, Flickr/Creative Commons)

MONTPELIER (AP) — Demand driven by the farm-to-table movement knows no seasons, so farmers in colder areas of the country increasingly use greenhouses and similar structures to meet wintertime demand for local produce.

While crusty snow and ice covers the ground in January in Vermont, spinach leaves sprout in rows of unfrozen soil inside a high tunnel — a large enclosure covered by plastic film that is warmed by the sun and protected from the wind.

“I can never keep up with the spinach demand,” said Joe Buley, owner of Screamin’ Ridge Farm in Montpelier, who planted the spinach in November and will sell it in about two weeks.

This time of year, when vegetables are trucked in from California and Mexico, some consumers clamor for fresh local produce.

“I’m definitely interested in supporting local agriculture, and I definitely like eating greens in the winter,” said Serena Matt of Marshfield, Vermont, who paid Bear Roots Farm in South Barre, Vermont, ahead to get biweekly bundles of produce that in the winter typically include greens like spinach or baby kale.

The federal government helped spur the growth in winter farming by providing financial and technical assistance to farmers to install high tunnels to extend the growing season, protect crops from harsh conditions, reduce energy use and improve air quality by reducing the transportation of food. Between 2010 and 2016, the U.S. Department of Agriculture’s Natural Resources Conservation Service helped producers construct more than 15,000 high tunnels around the country, with Alaska having the most.

“And it did so well we were able to get a second one, and we added a third one last year,” said Heidi Rohwer, estimating they cost about $7,000 each.

“If we don’t take enough greens, they get really mad,” Rohwer said.

Buley expects his spinach to start taking off soon, when the sun gets higher in February.

“They get really big, and we’ll come down through and just start harvesting like crazy,” he said. It’s also a lot sweeter, with thicker leaves, than summer spinach, because of the colder weather, he said.

“Root vegetables are nice, but usually right around Jan. 1, people are like, if you come at them with a butternut squash, they’re going to smack you,” he said laughing.

Getting eastern white pine to thrive

LED Lighting in Greenhouses Helps But Standards are Needed
January 21, 2020