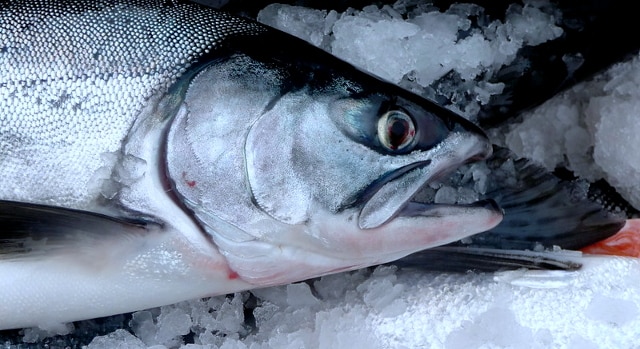 Darla Potter slipped and hurt her knee while caring for salmon, which were raised in cages located less than a mile offshore. (Isaac Wedin, Flickr/Creative Commons)

PORTLAND, Maine (AP) — An aquaculture worker who got hurt tending to salmon raised in offshore pens is covered under state law, but not under the federal law that defines some of the rights for mariners, Maine’s supreme court ruled.

The court ruled unanimously on Tuesday in a Workers’ Compensation Board appellate division decision involving a woman who was injured while working for Cooke Aquaculture’s salmon operation off the coast of Eastport.

The woman, Darla Potter, slipped and hurt her knee while caring for salmon, which were raised in cages located less than a mile offshore.

Great Falls Insurance Company contended that the Workers’ Compensation Board lacked jurisdiction because Potter should be considered to be a “seaman” under federal admiralty law known as the Jones Act.

The Supreme Judicial Court said the closest analogy to an aquaculture operation is an offshore oil platform, and it noted that oil platform workers have never been found to fall under the Jones Act jurisdiction.

Justice Catherine Connors wrote in the decision that a worker might be exposed to the elements of the sea on a platform even though it’s not “a traditional sea-centric occupation.”

“Just as one might drill for oil on land or on the sea, so also can the activity in which Potter was engaged — fish farming — be accomplished on land as well as on the sea,” she wrote.

The court ultimately ruled Potter was not considered a seaman so the workers’ compensation decision should stand.

But the court noted that it’s possible that in some instances an aquaculture worker could fall under the Jones Act.

“Each case is fact-sensitive, and there may be situations in which an aquaculture worker might be deemed a seaman,” she wrote.

Potter, 64, had a knee replacement and continues to be employed by Cooke Aquaculture. But she now works as a truck driver instead of the more physically demanding work on the salmon pens, he said.