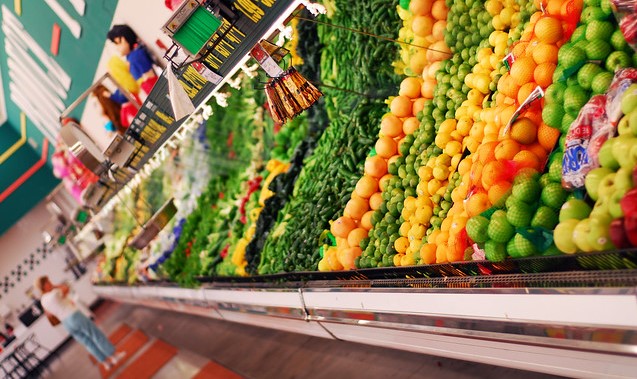 A new study by researchers at the International Food Policy Research Institute (IFPRI) is the first to document that the affordability of both healthy and unhealthy foods varies significantly and systematically around the world. (Guy Montag, Flickr/Creative Commons)

WASHINGTON — Poor diets are the now the leading risk factor for the global burden of disease, accounting for one-fifth of all deaths worldwide. While the causes of poor diets are complex, new research finds the affordability of more nutritious foods is an important factor.

A new study by researchers at the International Food Policy Research Institute (IFPRI) is the first to document that the affordability of both healthy and unhealthy foods varies significantly and systematically around the world. The study also suggests that these relative price differences help explain international differences in dietary patterns, child stunting and overweight prevalence among adults.

Past research has only studied relative price differences in specific countries, mostly in the context of the relative cheapness of calorie-dense processed foods as a risk factor for obesity in upper- and middle-income countries. But until now, no studies have examined the structure of relative price differences globally, or how these price structures might contribute to undernutrition and obesity outcomes.

“Our research shows that most healthy foods are substantially more expensive in poorer countries,” says IFPRI Senior Research Fellow and study co-author Derek Headey. “But while healthier foods become cheaper over the course of development, so too do unhealthy processed foods, like soft drinks.”

The study, “The relative caloric prices of healthy and unhealthy foods differ systematically across income levels and continents,” co-authored by IFPRI’s Headey and Harold Alderman, was published in The Journal of Nutrition. Using national price data for 657 standardized food products in 176 countries collected under The International Comparison Program (ICP), the authors develop a novel measure of how costly it is to diversify diets away from traditional calorie-dense staple foods such as bread, corn or rice. The study shows that higher caloric prices of a food predict lower consumption of that food and explores how those price differences might explain international differences in child stunting and adult obesity.

The study finds marked variations in the affordability of both healthy and unhealthy foods across different regions of the world, and at differing levels of development. In the world’s poorest countries, healthy foods were often extremely expensive, especially nutrient-dense animal sourced foods, which are widely known to be effective in reducing stunting. Eggs and fresh milk, for example, are often 10 times as expensive as starchy staples. Another ultra-healthy food for kids – specialized infant cereals fortified with a wide range of extra nutrients – are sometimes 30 times as expensive as the nutrient-sparse traditional cereals more commonly fed to infants.

“Prior to this study, we already knew that the poorest children in the world weren’t consuming enough of the really nutrient-dense foods that promote healthy growth and brain development”, said Headey. “But now we have a better idea why: poor people also live in poor food systems. That combination of low incomes and high prices means they’re simply not going to buy enough and eat enough of these nutrient-dense foods.”

While poor child feeding practices are often attributed to limited nutritional knowledge in low income settings, the authors found that the high prices of nutrient-dense foods offered an alternative explanation of their low consumption. Even more strikingly, they find that higher prices of milk, eggs and fortified infant cereals predict higher rates of stunting. “The link between milk prices and stunting is especially strong”, said Alderman, “which is entirely consistent with a whole body of evidence on the strong linkages between dairy consumption and child growth.”

Although the study found that economic development tends to make healthy foods more affordable, that process also tends to make unhealthy foods cheaper. Sugar-rich soft drinks are relatively expensive in many low-income countries but have become inexpensive and widely consumed in middle- and upper-income settings.

Indeed, Headey and Alderman find that lower prices of soft drinks and sugar-rich snacks predict significant increases in overweight prevalence among adult populations. “Public health agencies in upper income countries have been concerned with the high consumption of sugar-rich foods for some time,” said Alderman, “but our study shows that these products often become very affordable in middle income countries, and sometimes even in relatively poor countries where obesity rates are really on the rise.”

The researchers noted that policymakers have several tools available to help make nutrient-rich foods relatively more affordable, including nutrition-sensitive agricultural investments that could make healthy foods cheaper, and taxation and regulation efforts – such as food labelling – to curb consumption of unhealthy foods.

“These findings raise an important agenda for future research: understanding why food prices vary across countries, and sometimes within them, and how best to change food prices in a way that leads to better diets and nutrition outcomes in rich and poor countries alike,” Headey said.

An apple carries about 100 million bacteria