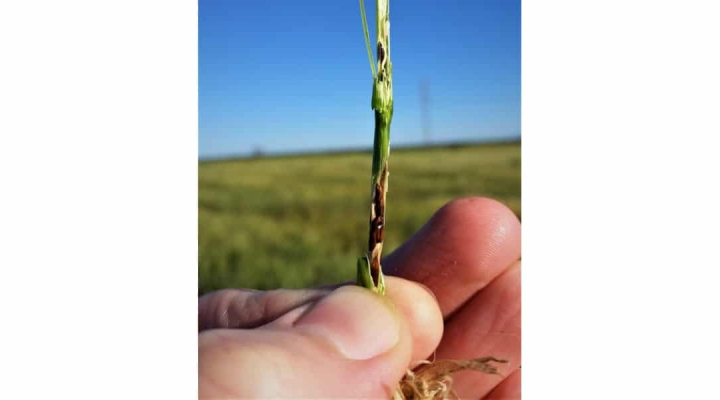 COLLEGE STATION, Texas — Hessian fly infestations appear to be a widespread issue for wheat producers in parts of Central Texas and the Blacklands region this year, according to Texas A&M AgriLife Extension Service experts.

David Drake, AgriLife Extension integrated pest management specialist, Commerce, said he has received numerous calls to look at infested wheat fields. Infestations around the state have been site-specific, but above-normal temperatures and dry fall weather likely allowed pest numbers to build. Some fields were likely to be salvaged for forage, while others were expected to be plowed under and replanted with other crops.

The Hessian fly is a small fly that can severely damage wheat and other small grain crops like barley and rye during its larval stage. There are several wild host-plant species for the Hessian fly including quack grass, western wheatgrass, goat grass, timothy and other wild grasses.

The cigar-shaped larvae have a creamy white body with a green streak down the middle of its back. After feeding for some time, the larva forms a puparium, which ranges in color from dark brown to black and resembles a flaxseed.

“Some infestations are more severe than I have ever seen,” Drake said. “We typically don’t see infestations that bad, but once fields are infested there’s really not much you can do.”

Drake said crop rotation in fields and nearby fields is necessary to mitigate Hessian fly infestations. Cropping wheat to wheat in the same fields should be avoided. Timing of wheat planting is also a contributor to infestation potential.

“We tell most wheat grain producers to put off planting until flies are no longer a problem, but a lot of wheat is planted early as a dual-purpose crop for winter grazing and summer grain,” he said. “That can be a problem with back-to-back wheat. That is why rotation is important.”

Drake said there are Hessian fly tolerant wheat varieties, including TAM 204, which is a dual-purpose wheat, that can reduce tiller damages. AgriLife Extension specialists recommend producers look for Hessian flies in wheat fields and evaluate infestations, subsequent damage and the wheat variety’s ability to withstand feeding and yield loss.

Producers should consider the stage of progress, soil moisture conditions, yield potential and whether they can plow the field under and plant warm-season crops. Those with crop insurance should discuss options with their agent.

“It’s been a tough year for wheat producers in some areas. A lot of wheat acres were droughted out,” he said. “Having a Hessian fly infestation in a field that might be perking up adds insult to injury.”